Skip to content Skip to Programs Navigation
Should the NFL have punted on protests?

Should the NFL have punted on protests? 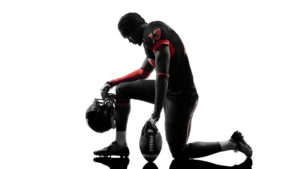 If you are looking for yet another article discussing who is in the right about the NFL protests (the president, the NFL, the players, liberals or conservatives), feel free to stop reading now.

If you are interested what brand managers can learn from national anthem dustup to better manage their brands, stay with me.

How we got here

Let’s begin with a little background and a quick recap of what happened. The protest issue began back in August 2016 when San Francisco 49ers quarterback Colin Kaepernick sat for the national anthem. He revealed his rationale in an interview after the game: “I am not going to stand up to show pride in a flag for a country that oppresses black people and people of color. To me, this is bigger than football and it would be selfish on my part to look the other way. There are bodies in the street and people getting paid leave and getting away with murder.” The reaction was mixed, with some supporting his right to protest and his position and others criticizing him for his stance.

A few other NFL players followed suit, but over the off-season Kaepernick left the 49ers as a free agent. No other teams picked him up, fueling speculation that no NFL owners wanted the controversy that accompanied him. As the new NFL season began a few weeks ago the issue seemed to have died out until President Trump called on NFL owners to fire players who would not stand for the anthem, “Get that son of a bitch off the field right now, he’s fired. He’s fired!” The NFL commissioner and owners responded with statements and other communications criticizing the president’s comments, calling them “divisive” and “disrespectful, saying they are united with their players and support their right to protest. Some owners went further, appearing on the field with their teams to lock arms and/or kneel during games.

Teams also took action, either staying in their locker rooms during the anthem, locking arms, kneeling or finding other ways to protest. Some asked fans to not do the usual hand-on-the-heart stance but to lock arms as well (few did). And individually more than 100 players protested in some way during NFL games the following week, by sitting, kneeling or raising their fists.

Fans have expressed mixed reactions in social media, but at the stadiums, at home watching TV and in polls, it seems clear the NFL’s steps did not help the brand. Already suffering rating declines last year and battling negative publicity around domestic violence, brain injuries and player run-ins with the law, this controversy came at an already difficult time for a brand that was long seen as golden and tightly tied to the fabric of America.

In response to the players’ protests on the field fans in the stands booed their teams, chanted “USA! USA!” or refused to support requests to lock arms themselves. At home fans tuned out of NFL games, contributing to a ratings decline for the league and subscribers of DirectTV’s NFL Sunday Ticket asking for refunds.

While only a couple small NFL sponsors have backed out, the impact of backlash is recognized in the NFL and beyond. Budweiser said it planned to continue its NFL sponsorship, but has provided a hotline for fans to comment on the controversy. Others have remained mum or tried to straddle the issue. And the NBA, seeking to avoid the NFL’s problem, has made it clear it expects its players to stand for the anthem.

Polls taken after the recent protests show the impact as well. In a CBS poll most fans, while they also think Trump’s comments were wrong and that players have a right to protest, disapprove of the player protests (52%). Another poll finds 64% feel “NFL players should stand and be respectful during the national anthem” while just 24% disagree and that 80% of fans want less politics mixed in with their sports. In another poll the net favorability ratings for the NFL fell from 30% to 17%. Lastly, a poll shows that 34% percent of fans say they are less likely to watch the NFL less due to the protests.

Given the data and the responses from fans, my analysis is that the NFL’s actions in response to Trump’s comments and tweets have not added positive brand equity to the NFL Shield. It appears the league has recognized this as they called a meeting of the owners and some players to discuss the protests and next steps. Unfortunately for the brand, it does not appear the NFL has developed a unified message and future position.

What the NFL got right – and got wrong

Obviously the NFL had to respond to Trump’s comments about the players, but it could have done so in a more rational way with a view towards the long term. Instead, likely due to the emotional impact of the president’s statements and the antipathy many feel towards him, they overreacted without thinking through the implications.

The NFL was right to support its players and their right to protest. To be clear, as Americans the players have the right to protest on their own time but the NFL could discipline them for doing so on the field if it chose to do so – however, it rightly chose not to. However, having the league and every owner put out statements calling the president “divisive” followed by coordinated protests on the field overplayed the NFL’s hand.

It would have been better if the league put out a short statement stating it disagrees with the president, supports its players and celebrates the country, the military and every citizen’s right to protest for us as a nation to form a more perfect union. From there the NFL should have continued on as before – allowing players who wanted to protest to do so but not having teams take a coordinated stance. Now, after taking such a hard stance, where does the NFL go? Did they think beyond last week as to what happens next and what actions they should take collectively or individually for the rest of the many games to come? It doesn’t appear so.

The latest episode in the saga is a letter from NFL Commissioner Roger Goodell to the team, which states that teams need to stand for the anthem. We will see if that settles the issue but, given the passions raised on both sides, it seems doubtful.

At this point you might think, “But leaders need to take a stand to protect their brands!” My point is not that they shouldn’t, but that they should choose their battles – and fight them well. Humans are a visual species so what fans see totally overpowers what players say. Seeing the players’ actions during the national anthem elicits a visceral reaction among many fans – and a significant number feel they are being forced to choose between their flag or the NFL. It should be obvious who will lose in that equation.

By the way, if your response to the above is “the flag is just a symbol,” you need to turn in your marketing card right now because flags and brands are both symbols and you should know the power humans invest in symbols. If you don’t then you don’t understand branding.

Lessons for other brands

In an era in which organizations might find their brands in conflict with the current president’s bully pulpit, here are a few things to consider:

Nordstrom is an example of a brand that both de-escalated the situation and had an exit plan. When the retail store dropped Ivanka Trump’s brand the president tweeted, “My daughter Ivanka has been treated so unfairly!” Trump wrote on his personal Twitter account, “She is a great person – always pushing me to do the right thing! Terrible!”

Nordstrom’s made no comment on the president’s statement and explained the reason for dropping the brand was not political but due to flagging sales. As a result of this approach Nordstrom emerged relatively unscathed by the exchange and the president moved on to other things.

While this is a challenging time for brands, it is possible to still live up to what your brand stands for and not turn consumers into opponents. But to do so you need to step back, get perspective and develop a game plan that will get your brand through the crisis and back on track.

By Mark McNeilly, professor of the practice of marketing at UNC Kenan-Flagler