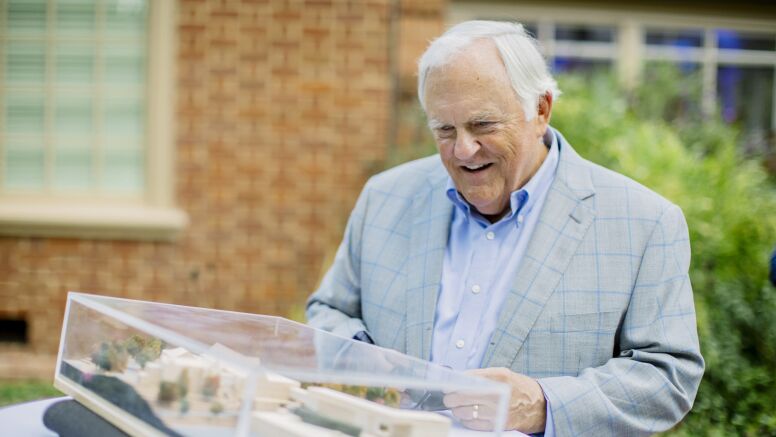 Bell called the gift his greatest investment ever in both people and real estate.

But then he decided he wanted to do even more: He increased his pledge to $25 million.

“Earlier this year, I decided to think big and make a significant financial commitment to help double the size of the Undergraduate Business Program so more students study business at Carolina,” said Bell. “After further examination about how I want to share my success and time, I concluded there is nothing I could do that would benefit our state more than supporting UNC Kenan-Flagler.”

Chancellor Kevin M. Guskiewicz announced the gift during his installation ceremony on Oct. 11, 2020. Guskiewicz also announced a second $25 million pledge by an anonymous donor to support the new building that will make it possible to increase enrollment in the Undergraduate Business Program by at least 50% and attract more top students from around the globe to attend its graduate programs.

“These two incredible gifts will allow us to expand our Undergraduate Business Program, giving us the opportunity to teach more students and spur economic growth in our state. To honor his lifetime of service and commitment to our students, we will name the new building at UNC Kenan-Flagler Business school in Steve Bell’s honor,” said Guskiewicz. 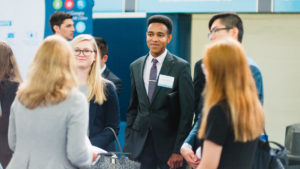 Since the Business School was founded in 1919, demand for a business degree at Carolina exceeds the available space in the McColl Building, which opened in 1997. Today UNC Kenan-Flagler has approximately 1,000 Undergraduate Business, 400 Master of Accounting, 1,600 MBA and 70 PhD students.

“This is truly a transformational moment for UNC Kenan-Flagler, for Carolina and for our state. It’s also a transformational moment for young people we don’t even know yet – some of whom haven’t even been born – because when they get to Chapel Hill, there will be places for them at UNC Kenan-Flagler thanks to this gift from Steve and Jackie Bell,” said Doug Shackelford (BSBA ’80), dean of UNC Kenan-Flagler and Meade H. Willis Distinguished Professor of Taxation. “And because more students will be able to study business, more graduates will be able to build better lives for their families, make their communities stronger, start new companies, provide good jobs, and develop new products and services that improve all of our lives.”

Bell is chairman of Bell Partners, one of the leading apartment investment and management companies in the U.S. Based in Greensboro, North Carolina, the firm owns or manages over 60,000 apartments throughout the country; has over 1,500 associates and nine offices; and has completed over $16 billion in apartment transactions since 2002. 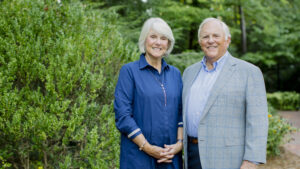 “Investing in the success of UNC Kenan-Flagler is an investment in making North Carolina even stronger,” says Bell. “Graduates become better employees, employers, entrepreneurs and contributors to our state. Having one of the best business schools in the U.S. right here in Chapel Hill is a precious resource for our state and our region.”

The new building will make it possible to increase enrollment in the Undergraduate Business Program by at least 50% and attract more top students from around the globe to attend its graduate programs.

“It will allow UNC Kenan-Flagler to expand on our mission to contribute to business and society,” said Becca Jordan (BSPH ’16, MBA ’21), who grew up in Alamance County and recently launched a small business. “I care deeply about opportunities for UNC students that help them explore and pursue their passions. This new building makes it possible to educate more students in an inclusive, collaborative physical environment and therefore attract the best students to North Carolina for many years to come.” 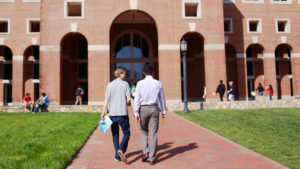 The naming of the building is an important legacy. “The Bell name will live on our business school campus alongside those of Kenan and McColl,” said Shackelford. “We will now have three buildings named after people associated with three major commercial areas of our state: Kenan in the Triangle and eastern North Carolina, McColl in Charlotte and Bell in Greensboro/the Triad. These remarkable leaders have given much to our state as both business people and generous philanthropists.”

The $25 million gifts by two donors are the largest gifts made by individuals to UNC Kenan-Flagler.

On July 1, 2020, the N.C. General Assembly passed a bill signed by Gov. Roy Cooper to provide $75 million in funding to expand and enhance the Business School campus. To receive these public funds, UNC Kenan-Flagler must raise $75 million in private funding by June 30, 2022.

Including these two gifts, UNC Kenan-Flagler has raised $58 million in private funding for the new building.

Bell understands the importance of the new building to the state and the urgency of raising private funds, said Shackelford.

“Steve’s support is stellar – as a leader, as a donor and as an advocate for UNC Kenan-Flagler,” said Shackelford. “He has deeply embraced our mission to prepare our students to be the next generation of leaders and views our continued success as critical to North Carolina’s economic and social success.”

Bell wasn’t able to join the installation ceremony when his gift was announced. He was visiting his father, who was the first oral surgeon in eastern North Carolina, to celebrate his 100th birthday.

Shackelford said the new building is critical to teaching, researching and serving at the highest levels. It  will: