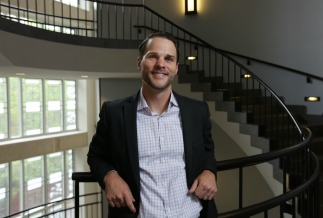 Sean Tracy (MBA ’15) knows a thing or two about being a team player.

A lifelong athlete, Tracy grew up on the football field and, after a successful high school career, went on to play football for four years at Harvard.

The time he spent on the field not only developed his football skills – it also helped him understand the dynamics of teamwork and build leadership skills. “It’s a great training ground for how business works,” says Tracy.

He put his skills to work in the business world, starting his post-grad career in commercial real estate investing. But after several years in the industry, Tracy realized something was missing.

“I reached a point in my career where I was not inspired by what I was doing,” he says. “I wanted to find a career where I could apply my strengths and make a difference.”

With his sights set on transitioning to a career in healthcare, Tracy drew up a new game plan. First up: Business school, where he could broaden his skill set and further develop his leadership skills in a safe environment.

As he compared MBA programs, UNC Kenan-Flagler stood out. The School’s extensive array of leadership and experiential learning opportunities were particularly appealing to Tracy given his plan to switch careers. The tightknit community and collaborative culture at UNC Kenan-Flagler were also reminiscent of his football days, when he relished being part of something bigger than himself. “The emphasis is on team,” he says. 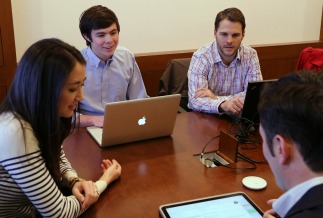 Tracy wasted no time getting involved when he got to Chapel Hill. During his first year, he participated in the STAR (Student Teams Achieving Results) program to gain hands-on experience in a different industry. Working with a team of undergraduate and MBA students also honed his leadership skills. “Being a good leader starts with being a good teammate,” he says.

And Tracy didn’t just participate in existing initiatives – he also helped launch one. “So many people at UNC Kenan-Flagler are doing inspirational things,” he says. “It motivates you to want to work with them and get to know them.”

Tracy and classmate Taylor Mallard (MBA ’15) co-founded The Global Scholars Academy Startup Challenge, a program loosely based on the TV show “Shark Tank” which empowers kids and provides an interesting way to learn about business and entrepreneurship through practical applications.

“Teaching business skills at a young age is something that I think is lacking in the U.S. education system,” he says. “There is no better way to learn these skills other than practical experience.”

Tracy’s passion for education became evident to his classmates, who nominated him for the role of MBA Student Association Vice President of Learning and Development. “When I found out I was nominated, I felt like it was something I had to do,” he says of the role, which involved working with students and faculty to enhance the full-time MBA Program curriculum and maximize students’ ability to compete for jobs at the world’s leading firms.

Under Tracy’s leadership, the MBA Curriculum Advisory Board completed a comprehensive review of the program’s core curriculum. As a liaison between students, faculty and staff, Tracy shared the board’s recommendations and helped implement some of them. “It was great practice for other leadership opportunities,” he says.

And those new opportunities are around the corner for Tracy, who will join the marketing department at Eli Lilly after graduation – an achievement he attributes to his UNC Kenan-Flagler experience.

“Having the opportunity to participate in so many aspects of business has given me the confidence to change careers,” says Tracy. “I’m proud that I got involved in a lot of things rather than just getting my education and going on my way. I feel lucky to be part of such a great group of people at such a great institution.”