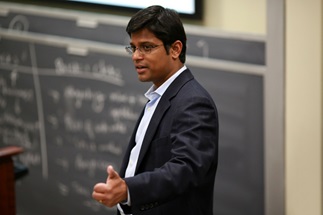 MBA students in the retail operations elective at UNC Kenan-Flagler are sent on a mission: comparing companies such as Home Depot and Lowe’s. But they’re not just looking at financial statements and news reports about the businesses – they’re heading to the stores to go shopping, checking to see if someone greets them at the door, what the products are like and assessing store operations.

The students are charged with evaluating which store will be stronger in the future – and analyzing numbers in a computer isn’t enough, says their teacher, Saravanan Kesavan, associate professor of operations at UNC Kenan-Flagler.

“Operations is heavy on quant, and I don’t want students to miss the forest for the trees while perfecting their quant skills,” says Kesavan. “One of the key success factors of retail organizations is the presence of passionate employees. These are the folks who work hard during holidays when the rest of the country takes time off. This is best understood if the students visit the stores, talk to the associates and discover for themselves rather than just sit in class and talk about them.”

Driven by his own passion for retail, Kesavan brings personal experience to the classroom. As a young man in India, his family ran a chain of successful bookstores that were profiled in The New York Times. While the bookstores have closed, they awakened an interest in Kesavan that continues today.

“I had experience in just about every part of the store. I would act as cashier, load products from distributors and handled customer service by the time I was in middle school,” he says. “My favorite part of running the store was talking to customers, understanding their needs and serving them. I got a lot of satisfaction from knowing that I was able to fulfill the needs of our customers.”

Sharing that first-hand knowledge along with his passion is part of what make him such a highly rated teacher. In addition to the retail elective, Kesavan is preparing a digital/e-commerce elective for the 2016-17 year and also teaches a PhD empirical research course.

Kesavan’s interest in retail goes beyond the classroom. He focuses on retail operations in his research, too, and much of what he learns ends up in the coursework in his classes. In 2015, he was part of a team, along with Jayashankar M. Swaminathan of UNC Kenan-Flagler and Olga Perdikaki of Texas A&M University-College Station, which studied the “Effect of Traffic on Sales and Conversion Rates of Retail Stores.” Their research was a finalist for the Manufacturing and Service Operations Management’s best paper award.

Because the retail industry is so dynamic, it’s an exciting area to study. Retail labor – such as the scheduling of workers in stores – has been of particular interest to Kesavan because it’s such an important determinant of success in the industry. About 10 percent of sales go to payroll, accounting for 85 percent of controllable expenses. One of his current projects is working with Gap Inc. to provide a stable labor schedule for its associates in a way that can simultaneously improve work-life balance and top- and bottom-line growth of the retailer.

Other work has immediate implications for retailers. For example, too many customers on a busy day in a self-service store can actually hurt sales, as Kesavan learned in a study with Vinayak Deshpande, operations professor and area chair, and PhD candidate Hyun Seok Lee. The group wrote about what happens when self-service dressing rooms become jammed with customers in “Increasing Sales by Managing Congestion in Self-Service Environments: Evidence from a Field Experiment.”

“Saravanan’s work is academically rigorous and has important and immediate applications for retailers – including both hourly workers in retail and their managers,” says Jennifer Conrad, former senior associate dean for academic affairs and Dalton Michael Distinguished Professor of Finance. “He has contributed to the national discussion on good labor practices and increased the visibility of the School in doing so.”

Even when Kesavan isn’t on the job, he can’t take his mind off retail. When his daughters spent a year studying in India, Kesavan wanted them to pay attention to cultural nuances and discuss their observations with him. He proudly recounts that his older daughter noticed that people would stand almost on top of each other when in line at a store – a custom which she had not observed in the U.S. That’s because in India, other shoppers will cut the line if you leave any breathing room, explains Kesavan. Understanding this type of customer behavior is vital to improving retail operations, he says.

When Kesavan completed his DBA at Harvard Business School in 2007, UNC was at the top of his list of places he’d like to work. The appeal of Chapel Hill for his family was strong, too. Kesavan’s wife works for Quintiles, the world’s largest provider of biopharmaceutical services, which has strong ties with UNC. And both girls play basketball, which means the family spends a lot of time going to games.

And professionally, working at UNC Kenan-Flagler means he can team up with accomplished – not to mention kind and generous – colleagues. “I was lucky to get the job,” he says.