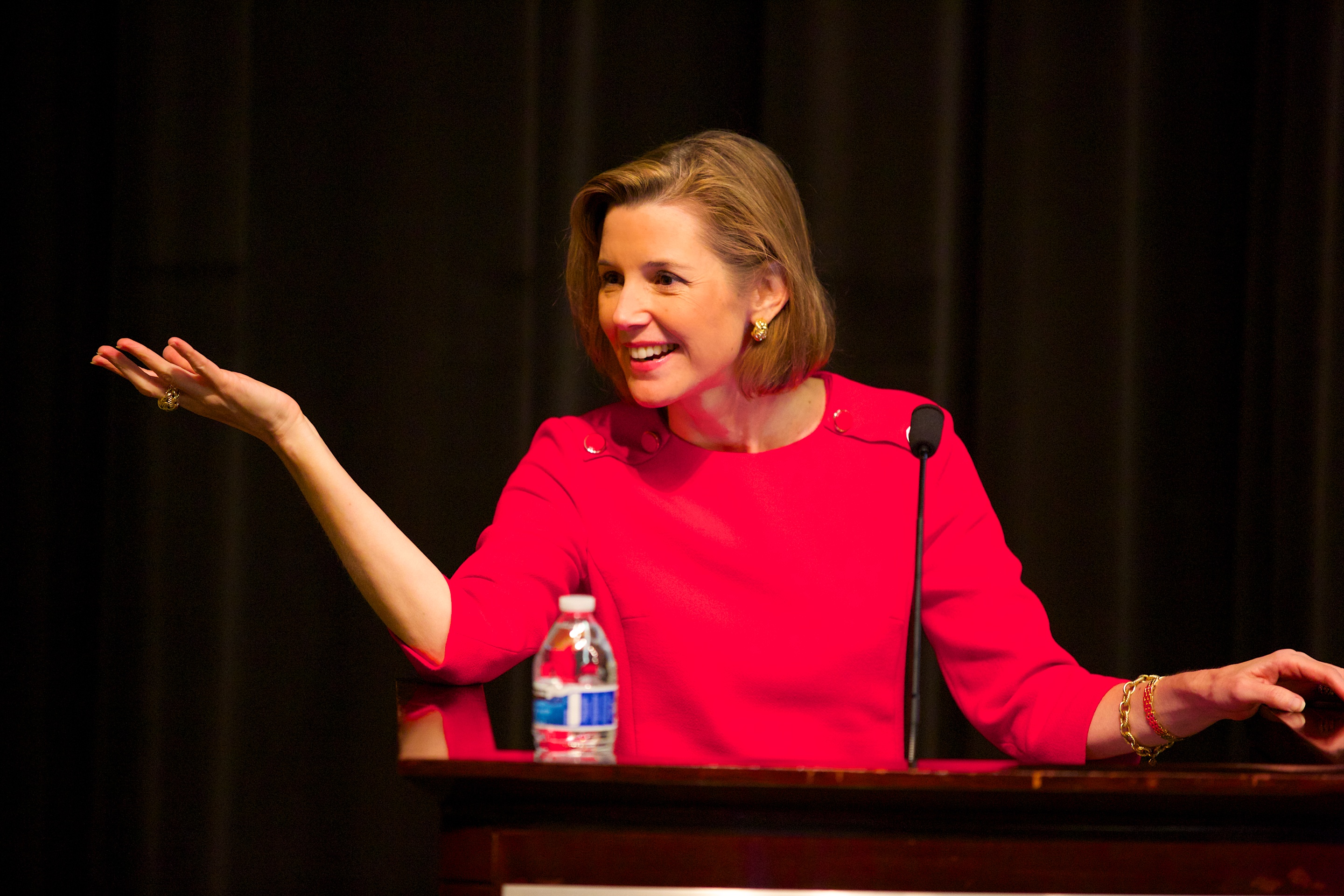 Sallie Krawcheck (AB ’87) has experienced her share of highs and lows during her 25 years in business.

She went from being one of most powerful women on Wall Street – featured by Fortune and Forbes on their lists of influential women – to being fired twice, quite publicly, only to rise back to the top as the owner of a 30,000-woman-strong business network.

Krawcheck shared what she learned from her experiences at the eighth annual Carolina Women in Business conference at UNC Kenan-Flagler.

She began by saying that it was “good to be back home.” The Charleston native attended UNC on the oldest, most prestigious scholarship in the United States, now known as the Morehead-Cain. Attending UNC was the “biggest friggin’ deal of my life,” she said. After she graduated with a journalism degree and a second major in political science, she went to New York to work at Salomon Brothers.

“My 20s were a time of complete professional wandering,” she said, and at 29, she was a stay-at-home mom who had no idea about what she wanted to do next. It’s okay not to be crystal clear on what you want to do early or even mid-career, she said. “Keep doors open, be open to new experiences, but be clear about what you do and don’t like.”

Krawcheck knew she didn’t like investment banking – and she loved writing, analytics and being with people, and had a talent for seeing patterns in numbers. “I was standing in my kitchen, at 29, eating a pear, and it was like, ‘BOOM!’ I wanted to be an equity research analyst.”

She sent resumes to countless firms and almost all rejected her. Lehman Brothers rejected her three times. Then she heard from Sanford C. Bernstein & Co., a sell-side research firm she described as “very analytical, quirky, research intensive.” She started work Oct. 10, 1994, “one of the great days of my life.”

Krawcheck quickly became known and respected for her honest and impartial research — straying from the industry standard for analysts to be publicly positive on a company, no matter its financial situation. “I was having a blast,” she said. “I became the number one analyst in my industry in a year, which was unheard of.” Her objectivity earned a cover story in Fortune in 2002 as “the last honest analyst.”

She became chairman and CEO of Bernstein, and attributes her success in part to having a sponsor there who guided and invested in her. “He was my mentor, but more importantly he was my sponsor,” she said.

Sandy Weill, then head of Citigroup, hired her as chairman and CEO of Smith Barney, where she oversaw global wealth management and later served as CFO and head of strategy for Citigroup Inc. She left in 2008 after she pushed the bank to help clients who had lost money on investments sold as low risk investments.

If your values and your ethics are not aligned with your company, you need to leave your job, she said. “You can get another job, you can’t get ethics back.”

In 2009, Bank of America named her as president to turn around the Merrill Lynch global management unit. When the CEO who hired her left the firm, she was left without a sponsor, which can be “very painful” for your career. She made her numbers and “kept her nose clean,” but the firm let her go in 2011.

Women face additional hurdles in business, she said, and “societal expectations can be huge.” Don’t take in media messages of perfection and “doing it all,” she warned. Figure out what you can let slide and recognize that your career is a marathon, not a sprint.

Krawcheck is “sick of people giving women advice,” so instead she shared 10 hard-won lessons.

Read more about Krawcheck’s talk and plans in this Washington Post article about her visit to UNC Kenan-Flagler: http://www.washingtonpost.com/blogs/on-leadership/wp/2013/11/15/the-personal-philosophy-of-sallie-krawcheck/