Skip to content Skip to Programs Navigation
Safety not guaranteed

But sometimes they forget an important rule, make a mistake or take shortcuts.

The results can be costly interruptions in business operations, damage to a company’s reputation, serious injuries or illnesses, even deaths.

“Having operated in the high-risk safety space for a long time, I’m fairly convinced that there are not very many people in the world who intentionally do things they think will result in harm for themselves or others,” said David Hofmann, the Hugh L. McColl Distinguished Professor of Leadership and  organizational behavior at UNC Kenan-Flagler.

Researchers have long sought to understand why otherwise well-intentioned people fail to follow policies designed to protect them and those around them. If employees could be trained to follow rules consistently, workplace accidents, job errors and other problems could be reduced, saving time and money.

The decline of willpower

One theory is that willpower and the ability to regulate our behavior — including conscientiously following safety rules and procedures — declines as we get tired.

Just as muscles get tired after exercise, willpower or the “self-regulatory muscle” gets weaker after a person has been working for a while – especially if the job requires mental focus or emotional regulation and the constant switching of gears between different types of tasks. The theory predicts that when people rest, their self-regulatory muscles will recover, enabling them to follow procedures more faithfully when they return to work after a break. 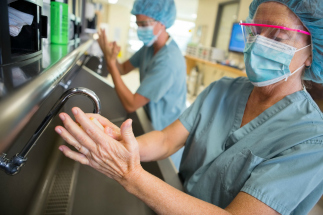 Hofmann and colleagues Brad Staats of UNC Kenan-Flagler and Hengchen Dai and Katherine Milkman of the Wharton School used a large dataset to study this theory in the real world.

Hand washing is a big problem in health care. Worldwide, the World Health Organization estimates that health-care workers follow hand-hygiene protocols about 38 percent of the time, on average.

In hospitals, where sick patients are especially vulnerable to infection, cleaner hands translate into patients who recover faster. Clean hands mean fewer hospital-acquired infections, which increase the cost of treatment, lead to longer stays and can threaten patients’ lives. Hand hygiene is one factor that contributes to hospital-acquired infections, which result in an estimated 100,000 deaths per year in the U.S.

Doctors and nurses know all this, and many hospitals go to considerable lengths to enforce hand-washing rules. They place hand sanitizer dispensers in every room, post reminder signs and even ask patients to remind their health-care providers to wash their hands.

But keeping their hands clean is just one of the many critical tasks health-care workers do. They fill out reports, monitor vital signs, administer and update prescriptions, interact with patients and their families and deal with emergencies. Other critical tasks compete with hand washing for their willpower.

Proventix makes a radio-frequency ID system which uses a system of badges and monitors to measure how frequently doctors and nurses wash their hands on entering or leaving patients’ rooms. It provided a database of more than 13 million observations – which covered more than 4,157 caregivers at 35 hospitals –for Hofmann and his colleagues to analyze.

The researchers used it to calculate how long individual health-care providers had been at work and how much time they had off between shifts.

Were doctors and nurses more likely to wash their hands earlier in their work shifts than later? When employees had a few days off between shifts did they comply at a higher rate with hand hygiene rules?

So what happened when workers had time off — from a few hours to a few days — between shifts? Sure enough, hand washing compliance rates went back up.

The researchers’ findings appear in the Journal of Applied Psychology article “The Impact of Time at Work and Time off from Work on Rule Compliance: The Case of Hand Hygiene in Healthcare.”

They have implications for other health-and-safety occupations – and any work in which compliance with routine rules and procedures is critical.

In the last few decades, rules have been implemented to limit the number of hours that truck drivers go without a break, how long pilots can fly and even how long doctors can stay on duty. Hofmann’s research supports those rules, reinforcing the idea that fatigue not only might lead to mistakes, but also reduces compliance with rules and procedures.

“There are a lot of conversations around fatigue, sleep deprivation and work performance,” Hofmann said. “How many hours can you work consecutively without a break?”

To improve compliance, their research suggests that how long people work, when and how often they get breaks, and how much time they get between shifts might be adjusted.

That could mean shortening shifts or building in mandatory breaks during shifts, Hofmann suggested. Reducing overtime also could make a difference.

But given that compliance – even among caregivers just starting their shifts – is relatively low, job design by itself isn’t a cure-all.

Other techniques – such as developing technology that automatically prompts people to wash their hands or follow procedures – are likely to be required.

Just knowing that they were being monitored resulted in more compliance with hand-washing rules by health-care workers, according to Hofmann’s data.

So mitigating the impact of fatigue is one part of getting employees to follow rules more consistently, but only one part.

View related content and additional faculty research insights in the 2015 issue of R.O.I., our interactive research publication. Download our iPad app or view on desktop. – See more at: http://www.kenan-flagler.unc.edu/news/2015/03/ROI-culture-consumer-mktg#sthash.f7FaMMLd.dpuf