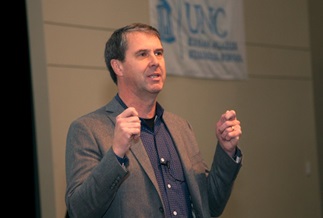 Want to be a better leader? Tap into your inner superhero, says Robbie Bach (UNC ’84).

Success begins with identifying your superpowers – the traits that make you a great leader – and weaknesses, says Bach, an author and former chief Xbox officer and president of entertainment and devices at Microsoft.

Knowing what strengths you bring to the table will help you build an all-star team – à la Marvel’s “The Avengers,” a group of iconic superheroes on a quest for justice. Each character has a unique superpower, as well as formidable weaknesses. Together they are better positioned for success as a balanced, well-rounded team.

Applying this simple concept to your career can lead to seemingly endless opportunities.

He speaks from experience. Bach led the team that developed the original Microsoft Xbox gaming console – a particularly challenging endeavor because he lacked technical experience. To overcome the gaps in his skill set, Bach enlisted a group of tech experts to round out his team.

It wasn’t always smooth sailing, though. Bach had grown accustomed to succeeding in everything he did – but at Microsoft, he found himself at the helm of a major project in a failing business. Nine months into the Xbox development project, he realized the team needed a strategic roadmap to help turn things around.

“As a leader, you have to have a very disciplined, very simple but very concrete strategy that you can communicate to other people,” he says. “When you do that, you can drive change.”

Bach and his team developed a framework – dubbed “The 3P Strategy” – purpose, principles and priorities. The framework can be implemented into any business and used to track progress towards individual goals.

“In three pages, you have to be able to tell the purpose of what you’re doing, the principles under which you’re going to do it and the five priorities you have to get it done,” he explains.

The road to launching Xbox was a bumpy one, but Bach says the experience underscored the roles that leadership, collaboration and communication play in the success or failure of a business.

“If you can be transparent with people, explain the problems to them and give them a path forward – and if they know that you believe [that the business can turn around] as a leader, you can move mountains,” he says.