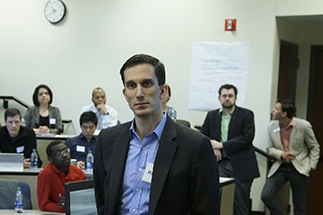 The next generation of leaders need to explore the world beyond their own borders, says Rick Ely (MBA ’03), an executive at Johnson & Johnson.

The journey can begin – as it did for him – at business school. Students should take advantage of opportunities to learn, change and test their limits, Ely says. “You will get out of an MBA program what you put into it.”

Ely recognizes the unique opportunity he had to reflect on his leadership style at UNC Kenan-Flagler. He discovered his passion, an ability to connect with others and a willingness to rally an organization behind a vision.

Ely is senior marketing director of the Johnson & Johnson baby care’s global franchise and he leads its global strategy, equity and communications. He began his career working at internet startups at the dawn of the boom and, of course, witnessed the bust, when internet companies had to reimagine their existence and step into a new reality. It was perfect timing for Ely.

“I had some early practical understanding, but I was eager for more foundational knowledge on how to grow a business,” he says. “I wanted instruction on how to lead an organization.”

When he decided to pursue an MBA, a general management approach combined with interdisciplinary requirements drew him to UNC Kenan-Flagler. Today he often calls upon the lessons he learned at the School.

For starters, working with a diverse study team in his first year at business school helped him be a better team player and leader, he says. Participating in the Marketing Club connected him with alumni and developed a network. He also interacted with people in a range of industries and parts of the world. “You take a little something, a little wisdom, from all of them,” he says.

He also participated in a Global Immersion Elective in Southeast Asia, which changed his life. He learned about different cultures and witnessed both the subtle nuances and dramatic differences in conducting business in different countries.

His first job after graduation was with Kraft Foods as a senior associate brand manager, where he supported Altoids, a $215 million brand

In 2005 he moved to Johnson & Johnson, where he’s been ever since. The company proved to be a good fit from the start. Ely quickly noticed the similarities between UNC Kenan-Flagler and Johnson &Johnson, which made it easier for him to find success, he says.

“Both places require winning as a team, working with a diverse group of people, and realizing a highly driven, cross-functional organization,” Ely adds. “At UNC Kenan-Flagler, there was a combination of winning at business and a clear set of values. There was a sense we would contribute to the world while achieving in business. It’s the same at Johnson & Johnson.”

In the early days Ely worked on skin-care brands in both U.S. and global roles. He led marketing execution and new products for Aveeno as well as for the beauty care global franchise. He also was responsible for global brand strategy and innovation for Clean and Clear, Lubriderm and Roc in more than 30 markets globally.

In 2014 he moved to Singapore – where he studied on that Global Immersion Elective – to lead marketing for the Listerine and Band-Aid brands across the Asia-Pacific region, including China, India and ASEAN, across 13 markets.

UNC Kenan-Flagler and Johnson & Johnson are a family affair for Ely and his wife Tracy Ely (MBA ’03). She is a national sales director for its Janssen Pharmaceutical Companies, where she leads a team of more than 350 sales representatives. 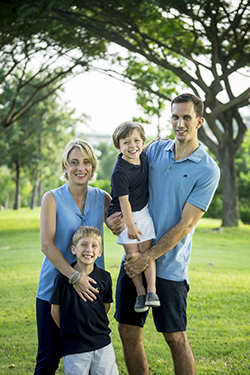 They met at UNC Kenan-Flagler and have been with the company for most of their careers. They went to work for Johnson & Johnson in different roles in Singapore. Their sons have spent more of their lives in the island city-state than in the U.S., and Ely values global exposure they had there.

“The U.S.-centric mindset is a missed opportunity because the future is global,” Ely says. “Understanding that requires firsthand experience outside the U.S. It’s hard to understand what another market is like from an office in New Jersey.”

Ely says UNC Kenan-Flagler is headed in the right direction in how it prepares students to lead globally. He points to its innovative Global Education Initiative, more active recruiting of international students, and leveraging technology in the classroom.

“The intent of UNC Kenan-Flagler is to develop well-rounded students with hard and soft skills,” he says. “I have not seen many schools embrace that combination.”

When hiring, Ely seeks certain character traits: a positive attitude, great communication style and well-defined values that are a good fit with the organization. And he asks about leadership style and the kind of legacy they want to have. Most of all, he is looking for flexible, worldly and principled go-getters.

Ely remains connected to his alma mater. He helped build the recruiting program at Johnson & Johnson for UNC Kenan-Flagler and has participated in panel discussions both on campus, such as the Emerging Markets Summit, and wherever he was living.

He turns to classmates and other alumni to get connected with potential hires or learn more about those he has interviewed. He views the UNC network as a competitive advantage.

Ultimately, UNC Kenan-Flagler was the starting point for his successful career trajectory. Ely also credits the many great bosses he has had over the years. Their mentorship helped his leadership style evolve and recognize that communication is the key to getting the most out of a team.

“I am now very aware that the most effective style is servant leadership,” he says. “‘How can I help you be better at your job so we win as a team?’ It requires being open, transparent, understanding of different perspectives, and without ego.”