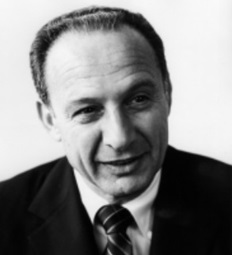 “You can’t go home again,” according to novelist Thomas Wolfe (BA 1920) – but that didn’t apply to Paul Rizzo (BSCOM ’50) when it came to his alma mater and the company he helped build.

The former UNC Kenan-Flagler Business School dean and IBM vice chairman of the board died Feb. 23, 2017, at age 89. He is remembered as a titan in the history and success of IBM and UNC – and for being called back by both institutions for second acts.

“Paul was a true leader who served with strategic vision, deep commitment and grace in his business career and here at UNC Kenan-Flagler,” says Doug Shackelford (BSBA ’80), dean and Meade H. Willis Distinguished Professor of Taxation. “He put us on the map as a top-tier business school and is one of the giants in our history.”

Rizzo came to UNC from New York for the first time as a college student. Coach Carl Snavely had recruited him to Cornell on a football scholarship – and when Snavely moved to Carolina in 1945, Rizzo followed. After a tour of duty with the U.S. Army, Rizzo lettered in football for four seasons on the legendary Carolina team that included Charlie “Choo Choo” Justice and Art Weiner, and was inducted into the Order of the Golden Fleece. He is remembered for scoring twice in the fourth quarter of the 1950 Cotton Bowl against Rice University to prevent a shutout.

Rizzo majored in accounting and received a BS in Commerce from what was then called the School of Commerce in 1950. He worked at Coopers & Lybrand and Dan River Mills before he joined IBM in 1958. His very successful business career at IBM culminated in his role as vice chairman of the board.

“In 29 years with Big Blue he called some key plays” and some were game winners, according to a Business North Carolina article. He gave the go-ahead for the production of the 4300 computer line, a lower-cost mainframe computer that could be mass marketed. “He was the guy who created the mentality which enabled them to go from the 4300 to the PC. He basically changed them from a custom shop to a mass-production shop,” the magazine writes. He also was a force in creating the strategic business unit that developed the IBM PC.

Rizzo came back to Carolina in 1987 to serve as dean of UNC Kenan-Flagler. Known for fostering innovation at IBM, Rizzo brought the same spirit to his work at the Business School.

He launched an era of phenomenal growth, investing in faculty and programs, broadening corporate relations and building the School’s national reputation. Under his leadership, the School converted the “part-time” evening MBA program to an Executive MBA Program. As dean, Rizzo advocated higher tuition for graduate students that UNC Kenan-Flagler could retain, which was crucial to taking the School to new heights and a significant factor in its success.

He also pushed for a new building, says operations professor Jack Evans, who preceded Rizzo as dean. “The Business School had outgrown Carroll Hall and New Carroll in the early 1980s. With the Kenan Center completed, Paul secured the neighboring site for what would become the McColl Building and initiated the fundraising that would be the financial foundation for building it.”

Rizzo also focused on hiring faculty and increasing research. “Paul hired me when I was a young professor fresh out of graduate school, and I thought the world of him,” says Shackelford. “One of the ways he endeared some of us young faculty was when an ‘old guard’ professor complained about our relatively informal attire around 1990. He said, ‘I hired them for their brains, not their clothes.’”

Soon after being named dean, Rizzo shared his goals for the School in an interview with Business North Carolina that are realized today:

Rizzo identified the need for lifelong learning for business people – and today, thousands of executives learn at the Paul J. Rizzo Center at Meadowmont. The Rizzo Legacy is one of eight MBA groups named after individuals who had a tremendous impact on the School’s full-time MBA Program. The Sidna Rizzo Recruiting Lounge and Graduate Interview Rooms on the second floor of the McColl Building are named for his dear wife of 57 years, who preceded him in death, and a classroom is named in his honor.

After Rizzo retired as dean of UNC Kenan-Flagler in 1992, IBM’s board called him back to help then-president John Akers. When Lou Gerstner was hired as chairman and CEO, he relied on Rizzo, too. In his book “Who Says Elephants Can’t Dance?: Leading a Great Enterprise through Dramatic Change,” Gerstner described Rizzo as “a tower of strength, a wise mentor and an insightful partner in evaluating strategy and people” – and an important hero in the IBM turnaround. 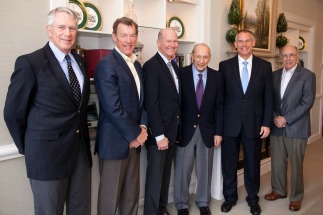 His contributions to Carolina continued long after he retired as dean. Rizzo played a leadership role in the Carolina First Campaign and served on the board of the UNC Healthcare System, UNC Board of Visitors, UNC Educational Foundation Executive Committee and UNC Board of Governors. He received the UNC Kenan-Flagler Alumni Association Award for Leadership in 2000. UNC honored him with the William Richardson Davie Award, the UNC General Alumni Association’s Distinguished Service Medal and an honorary Doctor of Laws degree for his outstanding accomplishments in business, higher education administration and philanthropy.

“Paul was a terrific mentor and counselor,” says Fulton. “Part of his success as a leader was that people liked him and liked working with him. He was decisive and pragmatic, and he had good judgment and integrity. He opened up our potential. Paul put the School in play.”

Rizzo – the student who became a University leader, the business innovator who became an industry leader – leaves a lasting legacy.

“Paul’s passing is a great loss for the Carolina community, but his many contributions will continue to benefit business education and business leaders for decades to come,” says Shackelford.

Tributes from the IBM community recalled his importance to their organization. “IBM is one of the handful of information technology organizations to complete 100 years of existence,” notes one tribute to Rizzo. “This is purely possible because of these great leaders like Rizzo who not only took the baton from Watson Sr. and Jr., but passed it to the next generation of leadership by refining and augmenting it with more values and outstanding leadership traits.”

Read more about Paul Rizzo’s life of leadership in business and higher education in The News & Observer and IBM’s tribute, as well as how to honor his legacy.