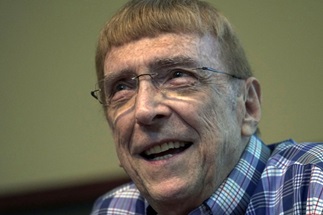 Harvey Wagner – a valued and longtime member of the UNC Kenan-Flagler Business School community – died July 23, 2017, at age 85. His leadership as a researcher and teacher in the field of operations is legendary, and his contributions to the School were truly significant.

“Harvey Wagner was a cornerstone in the foundation of our school, helping build UNC Kenan-Flagler to become the top business school known for excellence in research and teaching that it is today,” said Douglas Shackelford, dean and the Meade H. Willis Distinguished Professor of Taxation at UNC Kenan-Flagler. “His passing is an irreplaceable loss to our community, but his legacy continues in the generations of students he taught and scholars he mentored here at UNC Kenan-Flagler and around the world.”

Wagner had a brilliant mind and a generous heart. Considered a founding father of research in production planning and inventory control, he joined the UNC Kenan-Flagler faculty in 1976, served as dean, and remained an actively engaged, full-time professor in the operations area until his death.

Wagner received his BS and MS in mathematical statistics from Stanford University, and was selected as one of the first 12 university graduates to receive the prestigious Marshall Scholarship, pursuant to which he studied at King’s College, Cambridge University. He went on to earn his PhD in economics from MIT, and hold faculty appointments at Stanford, Yale and finally UNC.

A prolific researcher, Wagner’s seminal work on optimal lot sizes in production planning made a tremendous impact on scholars and practitioners since it was published in 1958. He completed the paper while a research assistant at MIT. In 2004 Management Science selected it as one of the most influential papers published in the prestigious journal – naming it as one of 10 most influential papers in the field.

Wagner had the vision to understand that academics need to help business practitioners understand their work so they could apply it effectively. In 1960, he began a career-long consulting relationship with McKinsey & Company. He also consulted with U.S. Department of Energy, Rand Corporation and, pro bono, with Catalyst Women’s Organization.

His scholarly work won many external awards and he received the Weatherspoon Award for Outstanding Research Accomplishments at UNC Kenan-Flagler. He was inducted as a fellow of many academic societies, including INFORMS, the American Statistical Association, and the Manufacturing and Service Operations Management Society, which named him a Distinguished Fellow in 2006.

Wagner’s intellectual drive and curiosity never waned, nor did his commitment to the School. He was passionate about his teaching and continued to offer his doctoral seminar every year as well as courses in spreadsheet modeling. He inspired and mentored countless students during his career.

His latest research involved machine learning and AI in operations, and he urged his younger colleagues to do the same. When asked why he kept up his work when others might have slowed down, he said that affection and respect for his departmental colleagues kept him going.

Wager was an inveterate collector. Starting with model trains as a child in Los Angeles, he gravitated toward the art world as an adult. He and his wife, Ruth Glesby Wagner, collected avant-garde and contemporary American paintings, many of which now hang in art museums all over the U.S.

In later years, Wagner traveled throughout Australia with his partner, the late Will Owen. They developed a deep passion for Australian Aboriginal art and amassed one of the largest, most comprehensive collections outside of Australia. Wagner and Owen donated the collection of more than 900 works of art to Dartmouth College, creating the Owen and Wagner Collection of Contemporary Aboriginal Australian Art at the Hood Museum of Art.

Read more about Wagner and how to honor him.