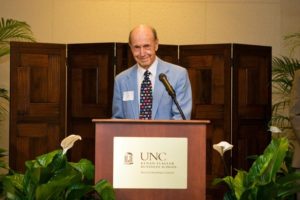 UNC Kenan-Flagler lost one of the giants of its distinguished history when Jack Behrman (MA ’45), beloved professor and UNC alumnus, died on August 19, 2016, in Chapel Hill.

Behrman served UNC Kenan-Flagler for more than 27 years as a professor of international business, director of the Full-Time MBA Program, associate dean of faculty and Luther Hodges Distinguished Professor of Ethics.

“Whenever I visit alumni around the world, he is one of the professors they remember most fondly,” said Dean Doug Shackelford (BSBA ’80). “I had the privilege of knowing Jack as a friend, and he gave me a sense of the treasure and legacy that each of us upholds daily as a member of this community. Jack was a great Tar Heel.”

His career and achievements – as an educator and public servant who worked in more than 75 countries – were truly remarkable, touching many lives and leaving a great legacy at UNC Kenan-Flagler and around the world.

Behrman served our community from 1964-91. His crowning achievement at UNC Kenan-Flagler was founding and directing the MBA Enterprise Corps (MBAEC), which began as a consortium of 16 leading business schools in 1990 and grew to have more than 50 member schools. The premise was a Peace Corps for MBA students, sending recent MBA graduates on year-long consulting assignments to private and privatizing companies in countries that were moving out of planned economies. Hundreds of men and women served in more than 30 countries in central Europe, Russia, Africa, South America and Central and Southeast Asia. He remained its chairman and CEO for 15 years.

One way the School recognized his contributions was naming the Behrman Legacy – one of eight MBA sections named after individuals who had a tremendous impact on the full-time MBA Program. In 2008 he received the Global Leadership Award for his global efforts to advance the School’s education, research and public service mission.

Behrman began his academic career at Davidson College, where he graduated with honors in economics and later received an honorary doctorate of law. He earned a MA in economics from Carolina and his MA and PhD from Princeton. He taught at Davidson, Princeton, Washington & Lee, George Washington and the University of Delaware.

He was assistant secretary of commerce for domestic and international business from 1961-64, serving under Secretary Luther Hodges in the administration of Presidents Kennedy and Johnson. His portfolio included international trade and investment policies and programs and preparation for wartime mobilization of the economy. His papers are housed in the John F. Kennedy Presidential Library and Museum.

After returning to Chapel Hill in 1964, Behrman continued as an advisor to the Departments of State, Commerce and Treasury, the National Academy of Science and National Academy of Engineering, United Nations, Committee for Economic Development, American Management Association, Council on Foreign Relations, Council of the Americas and the Fund for Multinational Management Education.

Known for his brilliant mind, Behrman was a pioneer in the fields of comparative management, foreign licensing of technology, international business and government relations, and the role of multinational enterprises. He published more than 40 books and monographs and 150 articles and essays and, in recent years was still writing, examining the promise and pains of economic globalization and its ethical and moral requisites.