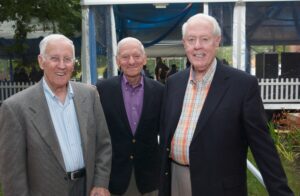 The UNC Kenan-Flagler community mourns the loss of Professor Bob Headen. He was a graduate of our Business School – then called the School of Commerce – and returned as a faculty member in 1967. As we prepare to celebrate the School’s 100th anniversary, it’s an honor to remember someone who made many important contributions through teaching, research and service.

Headen was a “hometown” boy from Siler City, North Carolina. After graduating from Carolina, he served a tour as a jet pilot in the U.S. Air Force and worked in banking. He went to Harvard Business School for a doctorate and then to Michigan State University to start his academic career. He always wanted to come back to Carolina and when he got the offer, after only a year in the cold, jumped at it.

He was an early advocate at UNC Kenan-Flagler for research that was as rigorous as it was relevant. It showed in his pioneering series of articles that used innovative econometric methods to predict the economic efficiency of TV media advertising schedules. Those efforts, some starting in the 1970s, were among the first applications of “big data” in marketing research; the analytics and data management for these projects literally took all of the mainframe computing power that was available to the University at the time.

Several of the marketing doctoral students who worked with Headen, and whose dissertations he chaired, went on to become prolific researchers in their own right, and one became editor of the Journal of Marketing, which was ranked as the highest impact scholarly journal in business.

He taught a range of undergraduate and graduate classes and was most active in the full-time MBA Program of which he was director during a formative stage. He served on the board of the Graduate Management Admissions Test and was a force for its modernization as the standards for business education skyrocketed and the number of business students grew exponentially. He also was associate dean of the Undergraduate Business Program and played an important role in planning for and creating the business minor.

Headen had great interest in international business at a time when it was almost an afterthought in U.S. business education. He spent a year on the faculty of INSEAD in Fontainebleau, France, where he returned often for short periods, and a year teaching at the International University of Japan in Niigata, Japan. He also was active in consulting and teaching for a wide range international and domestic companies, including Coca-Cola, Milliken and Westinghouse.

His preparation for classes was legendary. He had a reputation with both colleagues and students for being particularly thorough in translating every marketing strategy idea related to a business problem or case study into a corresponding analysis of financial impact on profitability. The first-year courses in accounting and finance had to put more emphasis on cost accounting and financial “what-if” modeling so students could keep up with him.  At one point, he taught both the required finance course and the required marketing course.  It is a tribute to his cross-functional perspectives that at the same time he was teaching a required course in international business.

Headen’s skills at combining financial analysis with marketing strategy planning resulted in him being a major contributor to the School’s Executive Education programs, which at the time were housed in the basement of Carroll Hall; the faculty offices and classrooms were on the upper floors. As he headed downstairs to teach in a management program, he liked to point out to junior colleagues that his executive courses generated income for the School to be able to give junior colleagues summer research support – and pay for everything else that was “overhead.”

Headen stayed engaged with the School even after retirement, attending events and participating in reunions. His obituary can be found here.