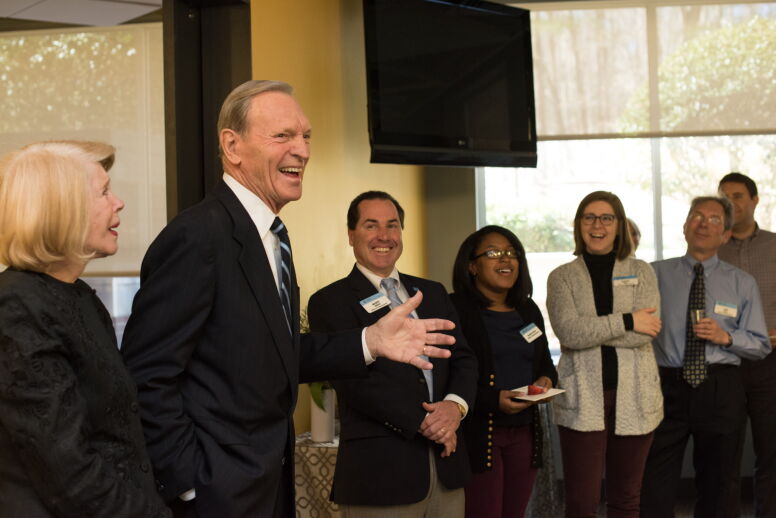 William Octavius McCoy (BSBA ’55), who served as Carolina’s acting and interim chancellor, died Dec. 25, 2022, at age 89. He made a lasting impact as a leader in both business and higher education.

McCoy was from Arba, North Carolina, and, like many business students of his era, grew up on a farm. There he developed a strong work ethic and skills that served him well throughout his successful career.

He attended Carolina on a scholarship and worked in the library, as a residence hall manager, and running the laundry delivery service for his dorm. He was a walk-on member of the football team for a time and a member of the Naval ROTC.

He graduated Phi Beta Kappa from our Undergraduate Business Program (and went on to earn his MBA from MIT, where he was a Sloan Fellow, in 1968). After his graduation in 1955, he was commissioned by the U.S. Marine Corps at Quantico, Virginia, and met Sara Hart, a student at nearby Mary Washington College. They married and moved to Pensacola, Florida, for his training as a helicopter pilot. He was stationed at Camp Lejeune before serving on aircraft carriers in Lebanon, Venezuela and Cuba.

McCoy began his business career at Southern Bell in Charlotte, the start of 35 years as a leader in the telecommunications industry, including 10 years as vice chairman of the board for BellSouth Corp., from which he retired in 1994. 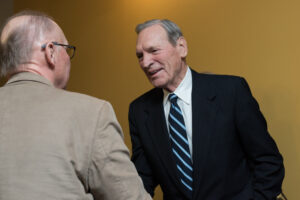 His retirement was short lived. C.D. Spangler (BSBA ’54), then-president of the 16-campus UNC System, recruited him to serve as vice president of finance for the System in 1995. “Nothing pleases me more than bringing home our most talented North Carolinians,” Spangler said at the time.

McCoy brought a sterling national reputation in management and finance to the task of the UNC budget, and his quiet, competent approach won friends and allies among state legislators and campus officials alike, according to the UNC General Alumni Association (GAA), and “earned the respect across party lines that made him an effective voice in the General Assembly and behind the scenes.”

After McCoy served in the role for three years, establishing a reputation for sound management and fiscal integrity across the 16-campus system, he took on a new, critical role for UNC-Chapel Hill: He served as acting chancellor for six weeks when then-Chancellor Michael Hooker (BA ’69) became ill. After Hooker’s death, McCoy was named Interim Chancellor and led the University during a difficult period and during the search for and selection of Chancellor James Moeser.

McCoy’s service didn’t end then. He was chair of the National Development Council, which served the University’s Bicentennial Campaign, and a member of the steering committee for Carolina First, the University’s fundraising campaign. 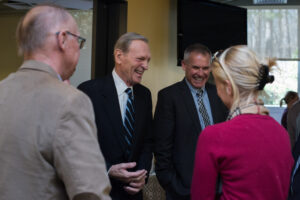 His service to UNC Kenan-Flagler was wide ranging and deeply important, too. He served as chair of the Board of Visitors at UNC Kenan-Flagler and remained an emeritus member of our re-named Board of Advisors. He served in other ways, too, including chairing our search for a new dean that resulted in the hiring of Steve Jones.

“I had the opportunity to serve on that committee and recall some of his stories about military service, which he told during our breaks,” says Interim Dean Jennifer Conrad. “I think that he was the first person to tell me that there is no such thing as an ex-Marine, and I know for a fact that he was a Tar Heel in perpetuity.”

Back in 1994, McCoy spoke with incoming MBA students about his experiences managing the then-unregulated, international side of a “Baby Bell.” It was a different era, when countries and governments around the globe were just beginning to see “there is value to telecommunications and value [to] data,” he said.

Under his leadership, BellSouth acquired cellular licenses across the globe long before the ubiquitous use of the cell phone. It was a risky and revolutionary decision that proved extremely profitable for the corporation. He talked about the importance of being a good partner: “One of the key values was to become the best partner [possible] to the world. We thought that was going to be important over time because if we could build a reputation that was good it would help us in finding good partners. … We then said that we wanted to be sure that … [our partners’] attitudes about business, about people, even about life, in a way were compatible with ours.”

In recognition of his service, UNC Kenan-Flagler honored McCoy with both the Alumni Merit Award in 1999, and the Kenan-Flagler Leadership Award, which recognizes exceptional achievement in a graduate’s career, personal endeavors and service to UNC Kenan-Flagler, in 2002. He also received the GAA’s Distinguished Service Medal; the Board of Trustees’ highest honor, the William Richardson Davie Award; and an honorary UNC degree in 2004. In 2000 he was inducted into the Order of the Golden Fleece, the oldest and highest honorary society at UNC, and the Faculty Council issued a special resolution in appreciation of his service. 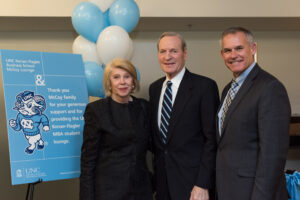 The McCoys were generous donors to UNC Kenan-Flagler, including their gift to support the MBA lounge in the McColl Building, which will move to the new Steven D. Bell Hall. They also supported the College of Arts and Sciences, Carolina Performing Arts and PlayMakers Repertory Company.

McCoy’s business career also included serving as a partner at Franklin Street Partners, a Chapel Hill investment management firm, and serving on corporate boards, including Carolina Power and Light Company, Kenan Transport Co. and Fidelity Investments. He was a member of the board of the Research Triangle Foundation, the UNC Health Care System and the developer of the Research Triangle Park. In Atlanta, he was active on boards of the Atlanta Symphony, High Museum of Art and the Atlanta Chamber of Commerce.

“Bill’s extraordinary, distinguished service in both business and business education leaves an important legacy that we benefit from today and will endure for future generations,” says Conrad. “He embodies our core values of integrity and impact, in particular.”

Read more about his remarkable life and how to honor him here.