Reflecting on the big win 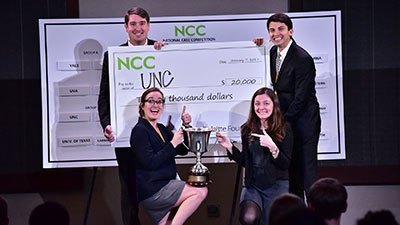 When I came back to business school, I was against the idea of pursuing consulting as a career. I told myself that traveling an unavoidable four days each week to a town where I knew no one wasn’t worth the promise of interesting work, the variety of experience or the pay.

Knowing all of this, I somehow still ended up registering for the Deloitte National Case Competition, thanks to the intrigue and motivation from my peers. My extraordinary classmates – Luis Carrera, Brad Keller, and Kitt Wolfenden – and I were the last team to register.

None of us knew each other all that well before things kicked off. Luis and I had actually never spoken before, much to my chagrin. We were the last of the remaining free agents before registration closed, and Brad took a chance rounded us up to make the team complete.

I couldn’t be more grateful. Somehow, despite my admittedly low self-confidence, we advanced after the first round and went on to eventually beat Duke in the local UNC-Duke Deloitte Case Competition in 2016, essentially beating out nearly 30 other teams. After that, I was in disbelief every day and still wonder what I did to deserve such a smart, funny, genuine team.

A personal goal is to try and focus more intently on the positives of life and the positive things I do, so even though I’m still not sure exactly why we won, here are four things I think we did really well.

Yeah, it’s cheesy and everyone always says to just “have fun,” but they always say it at the end of their self-indulgent speeches. So since I’m saying it at the beginning; it’s different. I think it is the number one reason we did so well during the case competition. We laughed so much during each of the overnight rounds. From tossing mini muffins around our room to singing our thoughts aloud, we let a lighter note take hold of everything we did. Had we been stressed to the point where we couldn’t laugh things off, it would have totally frustrated us and thrown us off. The same could be said for just about anything in life.

We respected each other.

Even though we all brought different ideas to the table, we showed respect every person on our team. We gave everyone equal time to express their thoughts and defend their propositions. We respectfully challenged assumptions and pushed each other to make our ideas even stronger. We gave credit where credit was due. For instance, if someone came up with an idea, we made sure to recognize how great it was at the onset, and then later on when we were feeling nervous. We’d bring ourselves back to our simple idea, acknowledge its brilliance and credit the inventor.

We also showed respect to the judges and the other teams. These case competitions aren’t just about your internal team struggles, but about the wider experience as a whole. Taking the time to appreciate and respect other also helped us to get out of our own heads a little bit.

We kept it simple.

We knew that if we wanted to be successful, we really just needed to have a solid idea that we could convey effectively through our presentation. We didn’t try to make the most elaborate slides. We didn’t try to expound upon the coolest or craziest of financials. We just decided on one, singular, simple idea and found ways to support that idea with data, visuals and creative storytelling. In the words of Michael Scott, the World’s Best Boss, “keep it simple, stupid.”

We kept it real.

Now I’m starting to feel embarrassed about the horn-tooting I’m doing here, but when it comes down to it, I think we ended up winning the local Deloitte Case Competition against Duke because we were normal. We didn’t try to act like anything we weren’t.

We embraced pushback from judges and acknowledged gaps in our recommendation – while also maintaining composure. We found ways to carry over some of the fun from our overnight prep sessions into our presentation and showed that we were regular, relatable people who understood the problem and had a way to try to resolve it. So much pomp and circumstance happens in case competitions, but you can give yourself an edge if you don’t drink too much of the Kool-Aid and show some humility.

I could not be more appreciative of everything this experience taught me, and for the people it introduced me to. I didn’t return to business school expecting to know everything. I came back to business school expecting to learn, to push myself and to try new things – hoping that those things would enlighten me as to which career path might suit me, because I wasn’t sure what that would be.

Thanks to this experience and the people I got to laugh along the way with, I’m more convinced than ever that I want to explore consulting as a career.