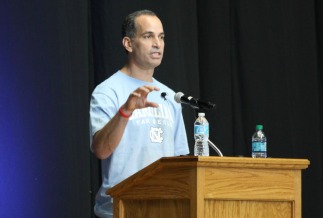 For many undergrads, junior and senior year of college stir up conflicting emotions. Some days, you’re on top of the world and ready to tackle post-grad life. Other days can be completely overwhelming. You might struggle with thinking you should have your life and career plans figured out, while at the same time feeling like you’re just starting to get the hang of college life and aren’t ready to leave any time soon – much less enter the business world.

Thankfully, students can breathe a huge sigh of relief. As it turns out, one of the biggest secrets to success is realizing that it is okay to be unsure about what the future holds, said Ric Elias, co-founder and chief executive officer of Red Ventures, a UNC Kenan-Flagler corporate partner and the largest technology-enabled platform in the U.S. for growing sales and marketing businesses.

Elias delivered the keynote at the 2015 UNC Kenan-Flagler Undergraduate Business Symposium, one of the oldest and largest student-run career development events in the U.S. that connects undergraduate students with more than 100 representatives from 45 leading global companies across a wide range of industries.

To everyone’s surprise, Elias ditched his traditional business attire and donned a UNC shirt for the occasion, asking, “Why didn’t I decide to come here for school?” before launching into his talk. He shared the following lessons and advice – things he wished he’d known in college.

Embracing and conquering fear can result in great success, says Elias. The first piece of advice he gives to new hires is to be more courageous and willing to take risks.

He points to three important decisions in his life as examples of risks he’s taken that have ultimately paid off: Coming to the U.S. for college knowing minimal English, moving to Japan as part of a rotational program through General Electric and asking his wife to dance for the first time. And while some risks will inevitably result in failure, those experiences serve as valuable lessons for the future.

“Life will favor the risk taker,” he says. 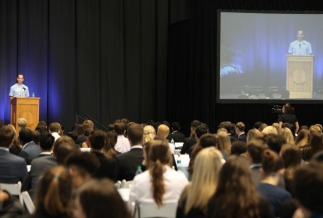 Get in the game.

When it comes to choosing a career, students are often encouraged to follow their passions – but they aren’t always given advice or guidance on how to discover what they are passionate about. Elias has seen many friends commit to things too early, only to realize that they wanted something different in the long run.

College is “a planting stage, not a harvesting stage,” he says. “The only true way to follow your passion is to get in the game.”

He encourages students to use their college experience to gain exposure to new things, learn as much as possible and develop their intuition. UNC Kenan-Flagler students “are incredibly privileged to have so many opportunities,” Elias says. “You need to be very engaged.”

“When you were a kid, you were always asked what you wanted to be when you grow up – and you probably had an elaborate answer,” says Elias. “As you get older, this question becomes harder to answer.”

He advises students to think about their career journey through a different lens. Rather than trying to figure out exactly what job they want to pursue, Elias suggests thinking about the types of problems they want to solve through their work. He also encourages them to be more open in their internship and job searches and explore opportunities in different industries.

“I would argue that the industry is less important than the chances that you get,” he says. “If you do not know exactly what you want to do, don’t be afraid to take a left turn. Don’t ever let anyone tell you that you can’t change your mind.”