Skip to content Skip to Programs Navigation
Reasons to celebrate 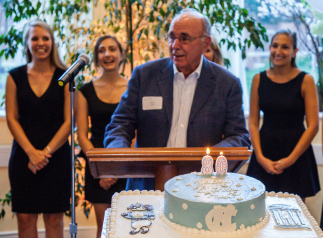 UNC Kenan-Flagler threw a birthday party for one of its own: Paul Fulton (BSBA ’57).

The 80 years young Fulton – a dedicated alumnus and the former dean of UNC Kenan-Flagler – was celebrated in honor of his birthday and his commitment to the School, the University and to education in the state of North Carolina.

Fulton is the non-executive chairman of the board of Bassett Furniture Industries Inc. and its former chairman and CEO. He spent most of his career with Hanes Hosiery and Sara Lee Corporation.

He served as dean of UNC Kenan-Flagler from 1993-97. His contributions to the University and the State include co-chairing the Carolina First campaign (which exceeded its $2 billion goal with 10 months to spare), serving on UNC’s Board of Trustees and Board of Governors, and founding Citizens for Higher Education to promote education in North Carolina.

“Paul has touched many lives in many ways – and he continues to help the University and UNC Kenan-Flagler in countless ways,” said Doug Shackelford (BSBA ’80), dean and the Meade H. Willis Distinguished Professor of Taxation.

Fulton thanked Shackelford for the birthday party, adding, “He’s going to be the best damn dean we’ve ever had. This great place is going to get even better.”

He also spoke about the importance of education to North Carolina. “The State is where it is because of education offered by UNC and all of its campuses. I worry about public higher education. It’s time to stop the bleeding. Higher education is the strongest economic driver we have in the state,” Fulton said.

David Ravenscraft, the Fulton Global Business Distinguished Professor of Finance, gave a toast on behalf of the School. “Except for a very few people like Bill Friday, Frank Kenan and Coaches Smith and Williams, Paul has had more impact on UNC and particularly Kenan-Flagler than anyone,” he said. “Admittedly, I am biased since I hold his chair, but I know many of you agree.”

Ravenscraft lauded Fulton’s “ability to relate to someone quickly, genuinely and on a very personal level” and credited him for “two beautiful, state-of-the-art Business School buildings.”

The new UNC Kenan-Flagler building was on the books when Fulton became dean, but “he oversaw its construction, secured the McColl name and named almost every space in it but the bathrooms. The Rizzo Center was conceived, named and started under Paul’s leadership.” 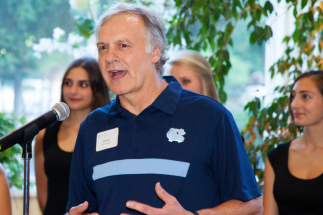 Fulton also is responsible for “revenue sources that exceed any university-endowed contribution in North Carolina history, and a very successful $2 billion campaign,” Ravenscraft said. “But except for a few awards and couple of plaques around UNC – and despite the buildings, chairs, classrooms and scholarships he has been involved in naming for others – you will not find his name on anything.”

“You might say the chair he endowed that I hold is an exception. However, he reluctantly accepted his name on temporary basis until I retire when, in his incredible generosity, he insists it be called the Ravenscraft Global Business Distinguished Professorship,” he said. “I told you I was biased. Paul exemplifies leadership as service, giving credit to everyone else.”

“Paul Fulton has been a part of my life for 60 years – and I am the better for it. I am sure there are legions of others that have felt the same way – as he has been a mighty force for good things all over North Carolina and beyond. I just wish I could have been there on this occasion to praise him and thank him publicly, and maybe sing ‘Hark the Sound’ with him one more time.”

And so the crowd did.