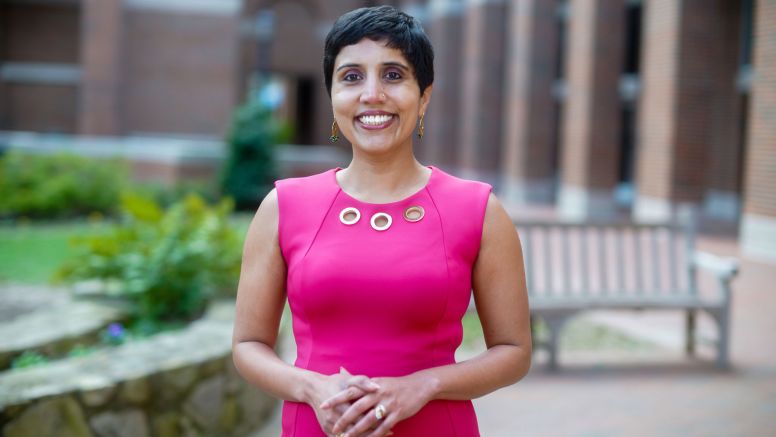 Don’t show up for Sreedhari Desai’s classes expecting to listen passively to lectures.  Leadership, negotiations and ethics are serious courses, but Desai uses a variety of approaches to actively engage with her students.

“In this day and age, you have to be both an effective educator and something of an entertainer,” says Desai, associate professor of organizational behavior and Crist W. Blackwell Scholar at UNC Kenan-Flagler Business School.

For instance, she might ask a student if he’s dating someone and where he expects the relationship to go. She isn’t just asking to get a reaction – she segues into tips that show decision-making in action and how it’s used in business.

On other occasions, she trades in the dreaded “cold call” for what she describes as a “warm call.” Instead of calling on students in using a technique that can embarrass or make them uncomfortable, she launches a dialogue.

“Education is a two-way path,” says Desai. “Students don’t need to just see me lecturing. They could simply watch a YouTube video or read a book for that.”

Another method she uses is breaking the class into teams to play games involving real money. Students polish their teamwork skills, and the interactions bring the class alive, Desai says.

“They have experiences, which are memorable,” she adds. “What they learn this way is hard to forget.”

Desai teaches the core Leading and Managing decision-making course and the Managerial Negotiations elective for MBA students, Leadership Skills for Master of Accounting Program students and Ethical Leadership for online MBA
students when they come to Chapel Hill.

She shares real-life stories to illustrate key lessons. For instance, she describes the life of luxury experienced by an MBA graduate of the University of California, Berkeley. The woman had it all, says Desai. She was making millions and lived in a seven-bedroom mansion.

“The students are thinking, ‘I want to be this person,’” says Desai. “Then, I hold up a picture of her prison ID and they’re thinking, ‘Oh God – prison!’”

Ultimately, Desai is demonstrating the slippery slope of a path driven by greed. “I try,” she says, “to keep things very real.”

Indeed, her research informs these discussions about ethics. Some of her best-known work is in the area of ethical nudges. Desai describes how these nudges can produce better behavior. She also has shown that anxiety can lead to unethical behavior.

Diversity is another issue she covers in her research. She tries to understand how gender norms and social structures influence whether women are accepted at work and what they experience there.

In one study, Desai and her colleagues looked at how married men viewed women at work. The research demonstrated that men with stay-at-home wives saw themselves as the CEO and their wives as a subordinate.

They found it difficult to view women as equals and were less likely to promote women or see them in leadership positions. Even those men who saw themselves as egalitarian or had more progressive views would change over time if their wife stayed at home; they would begin to see her as a subordinate and it would change their view in general.

Married conservative men with a wife who worked outside the home also changed over time, according to the findings. They would begin to see women as able to have more power.

“We are influenced by our surroundings,” says Desai. “It’s kind of like getting an accent.”

Desai believes that by enlightening people and making them more self-aware, they will change their behavior and society will experience progress, she says. Now, she is working on research about how men and women are treated differently at the bargaining table.

“Most of my work is done out of a deep sense of curiosity,” says Desai. “It tends to come out of real-world problems. My hope is to make the human condition better.”

She is married to Roman Shcherbakov, a Harvard trained astrophysicist who develops software for the communications industry. “He keeps data in his head and observes patterns in everything,” says Desai.

Their young son Max is following in his dad’s footsteps. He solved math problems on a blackboard visit during a weekend visit to UNC Kenan-Flagler with his mom. A YouTube video of his performance shows his prowess, says Desai.

“He’s ridiculously good at math,” she says. “My one regret is he knows more about math than psychology. I should teach him more.”

But that’s not the only talent Desai might want to pass on to Max. She is an accomplished artist. Her devotion to painting dates back to her childhood in India. Her teacher secretly submitted Desai’s artwork for a contest and she won. At the time, her family could not afford expensive oil paints, which were the award. It motivated her to continue nurturing her talent.

“I see life in colors,” says Desai. “Nothing is a single color. If you have a white vase, it is not really white. It will have shades of reflected light, tints of blue, for example.”

While Desai also enjoys reading and taking long walks in the fresh air, she faces every mother’s dilemma. How
much “me time” is appropriate when you feel the pull of your child, who is little for only so long?

Still, she is balancing it all, and she’s right where she is supposed to be, she says.

When Desai was on the job market after she earned her PhD, she evaluated offers. UNC Kenan-Flagler leadership had a unique message: The School was determined to see her flourish.

“It spoke volumes about the culture,” says Desai.

In fact, she says this identity of teamwork extends to the students.

“Here,” says Desai, “the culture is about helping each other succeed, and that makes my job as a professor better.”