Real estate is buzzing in The Hornet’s Nest 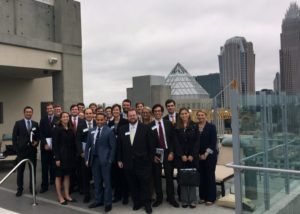 Charlotte, North Carolina is experiencing tremendous growth as a commercial real estate market. This expansion has touched all asset types and has plenty of room to grow, as MBA students from UNC Kenan-Flagler’s Real Estate Club learned during our visits with several local firms.

The city – which earned its moniker as “The Hornet’s Nest” during the American Revolution – has a population of approximately 2.4 million people, making it the 22nd largest metropolitan area in the U.S. But Charlotte has struggled to achieve the same recognition as similarly-sized secondary markets, including Denver, Nashville and Raleigh.

Charlotte’s time to shine has finally arrived. It has become a city on the move, driven by a confluence of forces contributing to a dynamic real estate environment.

National exposure put Charlotte on the map and spurred development.

Charlotte leapt into the national spotlight when it hosted the 2012 Democratic National Convention, says CIM Group’s Christina Bremner. The event brought federal dollars to support public projects critical to the city’s urban revitalization, such as Bcycle – Charlotte’s bike share program – and the expansion of the LYNX light rail system.

CIM, which owns and operates Epicentre – the dining and entertainment complex in the heart of Charlotte’s Uptown – has plans to add two hotels above the existing retail space to accommodate the volume of business travelers and visitors expected to the city in the coming years.

Corporate relocations and expansions have created jobs and boosted income in Charlotte.

Marquee events may generate headlines, but Charlotte’s ability to attract major employers and high-paying jobs is an even more important driver of real estate investments. As we learned from Fred Klein III of Childress Klein, several companies have moved to or expanded within Charlotte in recent years, including Sealed Air, Electrolux and MetLife. Childress Klein – which is building a new office for Sealed Air – has seen an increase in build-to-suit development and substantial office rent growth as a result. 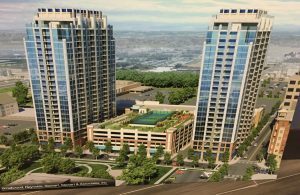 Most of Charlotte’s growing workforce are millennials – and their preference to live, work and play within walking distance has placed a premium on mixed-use and urban infill development.

SkyHouse Uptown is poised to meet this demand. Located two blocks from a planned LYNX station in a once-blighted section of N. Tryon Street, SkyHouse Uptown will feature two residential towers, a parking garage with a one-acre park on top and ground-floor retail.

The growth of multifamily development in Charlotte has also created a need for related products like self-storage, as we learned during a property tour with Morningstar Properties’ Dave Benson (MBA ’96).

Once overlooked, Charlotte has emerged as a strong real estate market. As too much capital chases too few deals in primary markets, secondary markets like Charlotte are becoming institutionalized, according to HFF’s Ryan Clutter. The combined forces attracting these institutional investments were witnessed firsthand by students in UNC Kenan-Flagler’s MBA Real Estate Club as we flew through our visit to The Hornet’s Nest.