For tax professor Courtney Knoll (PhD ’05), it’s always been all about the students.

First, it was the students she mentored as a teaching assistant while she was getting her master’s degree in accounting at the University of Virginia.

Later, when she was working for Arthur Andersen LLP in Atlanta, it was the new staff members she trained, taking time from her proscribed duties.

“I found myself wanting to do a lot more of that teaching – more than I probably needed to be doing in light of my client work,” she says. “That was my revelation.”

Knoll spent five years at Arthur Andersen before she came to UNC Kenan-Flagler to get her PhD in accounting.

And even while working toward her PhD, she again took on the role of teacher, getting so wrapped up in it that she joined the faculty in 2004 – even before she finished her dissertation. “But I got it done,” she laughs.

Knoll specializes in taxation, teaching in the Master of Accounting Program. She also serves as executive director of the UNC Tax Center, which bring together tax scholars, policymakers and practitioners who share a common interest in tax

She took on another role in July 2021: Associate Dean of the Master of Accounting (MAC) Program.

“Courtney brings deep knowledge of, experience in and dedication to the MAC Program,” says Dave Hofmann, senior associate dean for academic affairs and Hugh McColl Distinguished Professor of Organizational Behavior. “She is known for going above and beyond, both in and outside the classroom, and for her contributions to UNC Kenan-Flagler.” 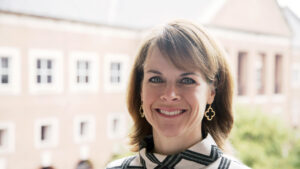 Knoll has twice won the prestigious Weatherspoon Award for teaching in the MAC Program – in 2007 and 2014 – a testament to her abilities to transform tax law and policy into a subject that students not only understand, but come to enjoy.

“She makes tax accessible and manageable, even for the least tax-minded among us,” a student wrote when nominating Knoll for the Weatherspoon Award. “She’s just an excellent, clear instructor whose passion for the subject is infectious.”

That passion began when she took an introductory undergraduate tax course. She enjoyed thinking and learning about tax. “I was drawn to tax right away – not only because of its universal importance and relevance, but also because the subject matter was inherently interesting to me.”

Students credit Knoll’s ability to teach “a topic most of the MAC class was dreading” – and to teach it well. 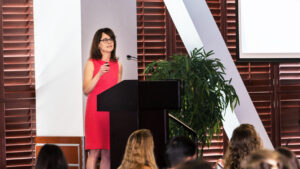 “I think some students are a little intimidated by tax in coming in the door,” she says. “But most of the time, I think they figure out their fear was misplaced. In fact, there are always a few students who end up changing to the tax track after their first tax course.”

“Courtney is the tax guru,” says Jana Raedy, who Knoll succeeded as associate dean of the MAC Program and the Ernst & Young Scholar. “She is a true mentor to our students on the tax track. She teaches lots of tax courses and teaches them really well. She interacts extensively with them, molding them into tax professionals.”

“I have a pretty good understanding of the world they’re headed into,” says Knoll. She gained some of those insights from her public accounting experience, but even more from her ongoing relationships with recruiters and alumni over the years thanks to her leadership roles with the Tax Center and the MAC Program.

She enjoys using that experience and knowledge to help students figure out where they want to be. Plus, she says, “real-world experience can also inform. If we know that real companies are dealing with these issues, it makes them all the more relevant.”

As she teaches the rules of tax law, for example, she’ll pull in context of the political processes that led to the law. “As opposed to just ‘here’s another rule, and here’s another rule,’ it’s more explaining why we have these weird rules,” she says. “That makes it interesting from a big picture perspective, rather than just working through the details of the tax law itself.”

An expert in her field with three degrees under her belt, Knoll admits that she sometimes forgets how it feels to hear about all of these complicated laws and rules for the first time.

“But I do my best to try and give it some meaning and to interpret it in a way that makes it manageable to understand,” she says. “I never succeed fully, but that’s why I come back to try it again the next time.” 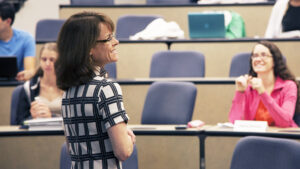 nd in her efforts to do so, Knoll continuously goes above and beyond, inside and outside the classroom, students say. “Her energy and enthusiasm while teaching radiates throughout the class,” one wrote, “and her willingness to help students and staff is seemingly unending.”

From time to time, Knoll says, students will ask her if there’s something else she’s working toward, someplace else she’d rather be.

“And I tell them, ‘what else would you rather be doing than working here on the faculty of a great university?’” she says. “Doesn’t everybody want my job?”