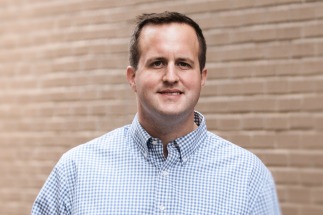 For all of the good done by 501(c)3 organizations, nonprofit leaders face a monumental struggle: connecting with supporters.

Ninety percent of donors give to a nonprofit just once – but 65 percent say they’d donate more if organizations actually took the time to get to know them.

After founding his nonprofit in 2010, Nick Black (MBA ’13) saw firsthand how hard it was to turn one-time donors into long-time supporters. The problem, he says, is that most nonprofits lack the staff and resources – such as analytics and affordable technology solutions – to efficiently track and engage with supporters after they give.

He’s been working on a solution ever since.

GoodUnited
To solve a problem that’s been plaguing the nonprofit sector for decades, Black needed to find a way for 501(c)3 leaders to engage and empower supporters without having to devote the bulk of their time and resources to marketing – and he did.

Black launched GoodUnited, a software platform that helps nonprofits build relationships with supporters by regularly sharing stories and information via email, in February 2017.

GoodUnited isn’t another one-size-fits-all solution – it’s all about personalization. The platform collects insights about a supporter’s behavior over time and uses that information to push content custom-tailored to their specific interests.

And it works. GoodUnited’s email open rates are “off the charts,” says Black. That’s good news for the nonprofit sector, which already surpasses $243 billion in donations annually.

Leading the way
If there’s anyone equipped to tackle a challenge of this magnitude, it’s Black. The former U.S. Army captain honed his problem-solving, strategy and execution skills on the battlefields of Afghanistan. After serving 27 months deployed to combat zones in the Middle East – and being awarded two Bronze Stars and the Army Commendation Medal for Valor – Black set his sights on business school.

“Coming from the military, I wanted to learn about the different aspects of business,” says Black. “Business school helped me understand the lingo, but there was also this great interaction of people and thoughts and ideas.”

At UNC Kenan-Flagler, he was introduced to the concept of social entrepreneurship – using business to benefit the greater good. He credits the MBA Program and the School’s extensive entrepreneurship offerings with building his confidence and preparing him to be a business owner. Courses like “Launching the Venture” taught him to identify his strengths and weaknesses and surround himself with people who could fill in the gaps. As a Kenan Institute Leadership Fellow, he learned to translate knowledge and expertise across sectors and gained hands-on experience helping North Carolina startups solve business challenges.

His formidable leadership skills have earned him invitations to participate in the Leadership North Carolina and Presidential Leadership Scholars programs, in which he worked and learned alongside emerging leaders from across the state and country – as well as President George W. Bush, President Bill Clinton and senior administration officials.

Black’s passion for helping nonprofits operate more efficiently grew through his experiences at the helm of Stop Soldier Suicide, a 501(c)3 he co-founded with two fellow Army veterans. As he attempted to balance fundraising and supporter engagement, a lightbulb went off. Though the organization’s database included nearly 15,000 supporters, Black had personally interacted with just 30 of them – and they were the donors who wrote the largest checks.

“What about the other 14,970 people?” he says. “To them, we’re either relentlessly asking for cash or not communicating at all.”

Building supporter engagement is, hands down, the biggest challenge faced by nonprofits – and it amounts to a massive number of missed opportunities.

Black is determined to change that.

Trial and error
Initially, he thought the solution was to simply provide more ways for people to get involved with nonprofits. To that end he launched inKind, a platform that offered donors a more transparent way to support their favorite causes. Through inKind, donors could purchase items needed for a specific project – such as nails for a Habitat for Humanity build – and learn about the people their gift would help, as opposed to simply donating money to a nonprofit and wondering how it was used.

The concept was a hit with donors – but Black and team encountered several unforeseen, complicated challenges with their business model. Because inKind worked with third-party retailers on order placement and fulfillment, Black’s team couldn’t control the user experience. The platform also required extra work for nonprofit customers, who had to determine what items were needed for a project, create a wish list, wait for donations to come in, and then pick up or transport items from a local inKind retail partner.

The experience taught Black an important lesson: “If a nonprofit has to do a lot of work, you aren’t solving a problem for them. You’re just giving them another tool they’re not going to use,” he says.

But the positive response from donors confirmed that Black and his team were onto something, so they decided to pivot and refocused their efforts on building the supporter experience.

And with that, GoodUnited was born.

Getting personal
GoodUnited’s mission is simple: to personalize philanthropy.

The company offers a simple solution for 501(c)3s to provide a meaningful experience for every supporter. The platform is tailored to help nonprofit leaders – from executive directors to communications and development officers – effectively engage with and empower supporters. But unlike other relationship management solutions, GoodUnited puts the donor experience first.

Through GoodUnited, supporters pinpoint what causes they care about most. GoodUnited uses this information to create relevant content for nonprofits. Donors receive emails with stories and calls to action tailored to their specific interests – and on their own terms. As they engage, GoodUnited tracks what really matters to them.

Black, for example, loves service animals and wants to learn more about how they support individuals with disabilities. Based on those interests, he’ll receive emails featuring stories about people who have benefited from having a service animal. “It’s these real-world stories – in addition to specifics about the nonprofit – that compel donors to give on a regular basis,” he says. “Philanthropy should be personal.”

Driving change
Disrupting the nonprofit sector is a big opportunity. The 1.1 million nonprofits in the U.S. make up 5.4 percent of the GDP. If even a fraction of these organizations can maximize efficiency and donor engagement, that number would skyrocket – and thanks to GoodUnited, they can do just that.