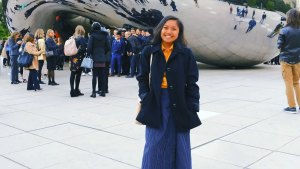 My 2018 fall break was about as non-traditional as a college fall break could be – but I wouldn’t have had it any other way. Rather than heading to the beach to bask in the sun, my 46 other GLOBE XII peers and I headed north to the “Windy City” – Chicago, Illinois – home of the Chicago Cubs, deep dish pizza and Chicago-style hot dogs. In 3 days, my peers and I heard from over 10 amazing entrepreneurs, innovators, community makers, and doers. Many lessons were learned there, but more importantly, many lessons were brought back. During my time at Chicago Ideas Week, I further discovered the power of relationships, community, and art in business and society.

I worked in Chicago this past summer, but something I did not take notice of until the study trip was how relationship-drive business was in the area. During our visits with Larry Levy, Eric Becker, Erik Severinghaus, Brad Keywell, Justin Malina, and Eric Duboe, I got to see the power of relationships in action. First and foremost, none of us would have had the opportunity to meet those inspiring individuals without the relationship that Professor Zoller had built with them. For those individuals to have given over an hour of their time to chat with college students, Professor Zoller must have built and maintained a great relationship with all of them.

During our session with Larry Levy and Eric Becker, we listened to their stories that exemplified the power of relationships and their view of relationship building through the lens of value creation. I loved hearing from them because what they said resonated with me – I like to identify as value creator and not a value taker. I’ve always thought, “Why couldn’t both parties benefit from a deal?” Often times, business people are pinpointed as people who just take and take, but on the contrary, like Mr. Levy and Mr. Becker, there are many out there who also like to create value for both parties involved. It was inspiring to meet top business leaders who not only made their businesses successful, but also helped many others on their way to the top.

Community as a unifying force

One of my favorite talks during Chicago Idea’s week was Radha Agrawal’s (way too short) talk about community. I believe in the power that a community has when a group of people come together. Radha’s speech was very enlightening and I was inspired by the positive impact she’s had on so many communities. Through her businesses such as Daybreaker and Thinx, she transformed every community that she got involved with. Additionally, through these movements, she has changed the way communities think about dance, parties, and women’s bodies. How did she do that and how can you go about doing the same? It starts with finding your people, then building a community around that. When people feel like they are connected with others, together they are a stronger force to create change.

The first event that I attended during Chicago Ideas Week was “Radical Creators: The Cultural Leaders Defining the Zeitgeist,” and it talked about the power that art and entertainment has on shaping the Zeitgeist (spirit/culture of the times). They brought various speakers in the arts/entertainment industry including the head writer of “Grey’s Anatomy”. I found it very interesting because I’m one who had little exposure to popular entertainment growing up. My friends often times joke that I live under a rock for my lack of popular culture knowledge. I don’t spend much time watching shows, listening to trendy music, or exposing myself to other forms of entertainment – yet, I find my values changing greatly. If a person like me, who engages with these forms of entertainment can still have my thoughts and values influenced, it makes me question how much more those, who are immersed in it, are influenced.

Art as a vessel for social change

I’m fascinated with the relative difference of values that different generations have. These general values are created from various things like experiences and historical events, however, I believe that values are also crafted by entertainers and those trying to create change through art/entertainment, radical creators. During Chicago Ideas Week, Krista Vernoff brought up how she used her privilege of writing episodes for the popular show, “Grey’s Anatomy,” to normalize things that women go through that may have before been taboo to talk about. Similarly, Cameron Esposito took her skills in stand-up comedy to bring light to the issues of many rape victims, an occurrence that’s more common than people think, yet is largely unspoken about. Through their work in the entertainment industry, they have been able to create great social change by influencing the mindset of their viewers/fans.

Learn, but it’s more important to do

Chicago Ideas Week brought a lot of learning for me where I was able to further learn about the impact of relationships, community and art in entrepreneurship and society. But more importantly, I learned that while it’s good to learn about such things, it’s more important to just do. How can I expect to create change in the world like many of these individuals without actually putting any of my learnings into practice? Keeping all of these lessons in the back of my mind, I plan on executing more on my dreams. I will continue to learn, but more importantly, I will do.