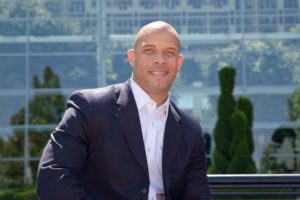 Doug Speight (MBA ’06) doesn’t just believe he can disrupt a trillion-dollar global industry – he’s on the verge of doing it.

Speight comes from a long line of entrepreneurs. Growing up, he learned anything is possible because he saw it happen firsthand.

An unfathomable number of game-changing ideas never go beyond the back of a napkin. Budding entrepreneurs often don’t know how to go from concept to reality. And if they do, they often lack the knowledge and resources needed to build a sustainable business.

But Speight is determined to change that – starting in his hometown.

A legacy of trailblazing
Theodore Roosevelt Speight pioneered the Speight family’s proud tradition of entrepreneurship, which spans more than 75 years. He had less than a dollar to his name when he moved to Durham, North Carolina, in 1932. Six years later he opened his first business, Speight’s Auto Service Center, at the corner of Pettigrew and Fayetteville.

It was an impressive feat in and of itself – but especially significant for its time.

Theodore Speight was an African-American entrepreneur who successfully built a company in Depression-era North Carolina, when Jim Crow was the law of the land and minority entrepreneurs had little access to loans from white-controlled banks.

Faced with monumental adversity, African-American entrepreneurs had to innovate. Together, they built a thriving business community – dubbed Black Wall Street – that nurtured minority entrepreneurs like Theodore. Through the tight-knit community, he connected with investors who provided capital and loaned him the equipment needed to build his auto shop.

The foundation for success
Growing up, Doug Speight was immersed in business from an early age. His family owned and operated numerous companies in the Durham area – from automotive services to taxi cab companies to heating oil supply and delivery outfits – giving him a firsthand look at what it takes to build and run a successful business.

“I learned a lot watching my parents and grandparents evaluate opportunities and weigh investments that generate both financial and social returns,” says Speight. “It provided me with practical, daily examples of how businesses operate and how business owners engage with clients and the greater community.”

Given his family’s startup success, it came as no surprise that Speight developed an interest in starting his own company. After graduating from North Carolina A&T with an engineering degree, he co-founded an engineering design company that managed high volumes of engineering drawings and data for large manufacturers, engineering firms and architects.

It wasn’t exactly smooth sailing, though. As a 22-year-old with limited business training and experience of his own, he made the kinds of mistakes that any young, relatively inexperienced entrepreneur would – such as leasing technology but failing to shop around for the most advantageous financing.

“We did virtually everything that is possible to do wrong in a startup company,” he says.

But it wasn’t a total wash. Speight and his co-founder learned as they went and were eventually exited the company – and he walked away from the experience knowing he could do better.

Speight decided to pursue an MBA to build on his experiences, gain in-depth knowledge of key business fundamentals and develop a global perspective – something he hadn’t had much exposure to since his family’s companies serve a hyperlocal market.

After looking at different executive MBA programs, he knew UNC Kenan-Flagler was the right fit.

“The entrepreneurship program was stronger than other schools that I explored,” he says. “UNC Kenan-Flagler allows you to zoom out and see what’s happening globally, to recognize the macro-trends and understand the economics behind them. The MBA program also offers courses in operations, a key element that many schools overlook. This balance provides the one-two punch – knowing how to recognize global opportunities, launch quickly and gain traction regionally.”

The School afforded him the opportunity to learn from world-class faculty, classmates and alumni. He also found a trusted mentor and advisor in Ted Zoller, T.W. Lewis Clinical Professor of Strategy and Entrepreneurship and director of the  Entrepreneurship Center.

Those inefficiencies present a huge, untapped business opportunity in a trillion-dollar global industry ripe for disruption.

“It’s easy to overlook because lease financing isn’t a sexy industry,” says Speight. But that’s exactly the kind of opportunity that his family has found so much success with – providing services and solutions for practical, every-day needs.

Speight plans to capitalize on the opportunity with his latest venture, Cathedral Leasing, an online marketplace connecting lease finance institutions with businesses that need to acquire equipment affordably. He left his job at Oak Ridge to focus on building Cathedral full-time and planned to launch the company in Tennessee – but a twist of fate brought him back home to Durham.

Pioneering transformation
In March 2016, Speight was selected to participate in an entrepreneurial residency program launched by CODE2040, a San Francisco-based nonprofit aimed at nurturing Black and Latino entrepreneurs and tech talent. Its name references demographic projections indicating 2040 will be the year that minority populations will make up the majority of the U.S. population.

The demographic shift, coupled with the rapid growth of the tech industry, presents what CODE2040 calls the greatest economic opportunity of our time: cracking the code on diversity in tech. But doing so will require a strong pipeline of skilled innovators, tech and STEM talent, making it imperative to inspire, create opportunities for, and foster engagement with younger generations.

“I view CODE2040’s work as increasing the number of net contributors to the economy,” says Speight. “Entrepreneurship is the one element that can scale. Minority entrepreneurs are in a unique position to see opportunities in their demographics.”

But minority entrepreneurs like Speight are rare in today’s VC-fueled startup world – and because of this, many promising ideas may never have a chance to go beyond the “back of the napkin” phase. Bringing all founders together and providing them with access to resources and support will not only create new opportunities, but will also benefit the startup community as a whole.

That’s exactly what the CODE2040 Residency is aimed at doing, with a particular emphasis on increasing the pipeline of Black and Latino entrepreneurs and creating diverse tech ecosystems.

For the pilot program – backed by Google for Entrepreneurs – CODE2040 selected three candidates to serve as entrepreneurs-in-residence (EIRs) at local tech hubs in Durham, Austin and Chicago. In 2016, it expanded to seven tech hubs, adding Detroit, Minneapolis, Nashville and San Francisco. Speight was chosen to be the second CODE2040 EIR for American Underground in Durham. As a third-generation entrepreneur, being selected to foster and unify his hometown startup community was especially meaningful.

“It’s something that’s near and dear to me because entrepreneurship has supported our family for three generations. My UNC Kenan-Flagler application essay that I wrote in 2004 references exactly what I’m doing today,” he says.

And thanks to CODE2040, Speight has an opportunity to continue his family’s legacy in Durham. The CODE2040 Residency will help Speight grow Cathedral Leasing and make a positive impact on the local economy in his hometown. As a CODE2040 EIR, he’ll receive $40,000 in capital to help grow his business, as well as space in American Underground. And he’ll also be mentored by some of the world’s top entrepreneurs and venture capital investors.

Speight aims to ignite change and make a long-lasting impact on the startup community. He’s set an ambitious goal for his work with CODE2040: to replicate the success of the “PayPal Mafia,” a group of investors and entrepreneurs who made their fortunes from PayPal’s early success. Among them: Tesla founder Elon Musk, LinkedIn’s Reid Hoffman and former PayPal CEO Peter Thiel.

By spawning numerous spin off companies, forming new venture funds and reinvesting in the startups of younger protégés, the PayPal Mafia reshaped the landscape of Silicon Valley. Now, it’s Speight’s turn to lead the way in his hometown community.

“American Underground has set an aggressive goal of becoming the most diverse technology hub in the world – and I love the audacity of that mission,” says Speight. “My ultimate goal is to create the PayPal Mafia of the black and Latino communities. That’s precisely the outcome of Durham’s Black Wall Street and I want to be a part of version 2.0.”