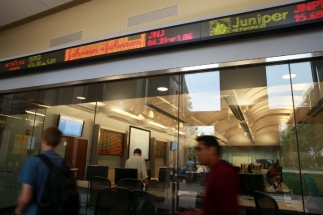 UNC is offering a BA in physics with a quantitative finance concentration that could be the first of its kind in the United States.

A joint venture between UNC’s Department of Physics and Astronomy and UNC Kenan-Flagler, the new major combines physics classes – such as mechanics and electromagnetism – with business and math courses – such as applied derivatives and differential equations.

“Physics is an intellectually interesting subject,” said Arapoglou. “This major creates an opportunity for students to prepare themselves for future employment in such areas as quantitative finance, risk analysis and management, and portfolio management.”

There is strong demand for people who can understand complex mathematical models and solve hard quantitative business problems, according to Arapoglou. “This is a great time to enter the finance job market.”

Henning said that many of his physicist colleagues now work in finance, and when Arapoglou (MBA ’80) worked at J.P. Morgan his colleagues often had PhDs in physics. Finance professors Jacob Sagi and Greg Brown studied physics before they embarked their academic careers – Brown worked for the Board of Governors of the Federal Reserve System.

Many analytical models used in financial engineering are derived from mathematical models used in physics, including the Nobel-Prize-winning Black-Scholes options pricing model, which is based on the heat equation in physics. Economists Fischer Black and Myron Scholes both studied physics prior to making their mark in finance.

The program was specifically designed as a BA rather than a BS to give students the freedom to choose the classes that interested them, Henning said. “It gives you flexibility. You can fill up your BA with as much math and science as you want or you can fill it up with business classes. This makes it appealing to a wide audience.”

The major is available for current and incoming students with no separate application. Henning and Arapoglou encourage students interested in combining math and problem solving with business to consider the degree.

“If you’re a student who likes to do quantitative problems and you like business, this is the degree for you,” said Henning.