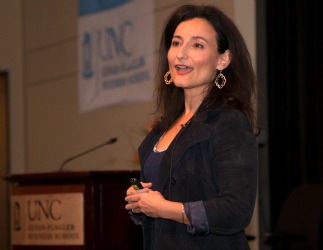 Women have the power to effect industry-wide change – and Phaedra Boinodiris (BS ’94, MBA ’08) is proof.

Boinodiris, global lead for serious games and gamifications at IBM, has transformed the gaming industry for women – and her journey to career success was anything but conventional.

Boinodiris’ interest in computers began at an early age. Her parents both worked at IBM, so computers were always around the house for her and her sister to play with, and programming became second nature.

She studied mathematics and computer science during her first stint at UNC. After graduation, Boinodiris and her mother started a company that provided custom application development for companies. They incorporated game design into the applications.

The family affair didn’t end there. Boinodiris and her sister realized there was a huge discrepancy in media coverage of the gaming industry. Women gamers were largely underrepresented – something they were determined to change. Together, the Boinodiris sisters launched WomenGamers.com, an online forum with articles and resources for the female gaming community. The response was huge.

With the success of their website, the sisters began to talk about opening a studio to develop games geared specifically towards women. But Boinodiris quickly realized that she needed to expand her business acumen and learn more about things like accounting and finance. That drew her back to Chapel Hill, where she enrolled in the full-time MBA Program at UNC Kenan-Flagler.

She got more than she bargained for – much more.

As a first-year MBA, Boinodiris participated in a case competition and pitched the idea of using gamification to help students learn about business. Her innovative approach caught the attention of the judges – including IBM’s vice president of strategy, who offered Boinodiris an internship with the company.

The opportunity allowed Boinodiris to bring her vision to life. During her internship she developed INNOV8, IBM’s first “serious game.” The simulation, which is available for free through the IBM Academic Initiative, has been downloaded and used by over 1,000 universities.

After graduating from UNC Kenan-Flagler, Boinodiris returned to IBM and worked her way up through the company. Her expertise has helped countless organizations solve business challenges and laid the groundwork for broader applications of gamification across industries.

Serious games are now used to solve complex problems, assess people’s personalities and evaluate how they work and collaborate with others, optimize teams and recruit employees. They can also be used to help cope with post-traumatic stress and to help researchers discover new ways to fold proteins, creating medicines that combat deadly diseases.

“[Many of] these things were actually done with IBM using game technology,” says Boinodiris. “I cannot underscore this enough: games are incredibly powerful instruments of change.”

Boinodiris delivered the afternoon keynote at the 2015 Carolina Women in Business (CWIB) Conference at UNC Kenan-Flagler. The annual event is organized by CWIB, a student organization that provides the women of UNC Kenan-Flagler with opportunities for career and community development and networking opportunities in preparation for their post-business school journeys.