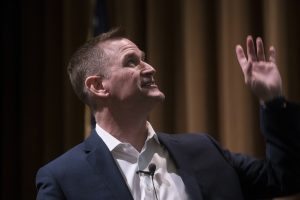 The Center for Sustainable Enterprise at UNC Kenan-Flagler Business and the UNC Institute for the Environment co-hosted 2018 UNC Clean Tech Summit. The annual event highlights the latest innovations, trends and challenges in the clean technology industry, and North Carolina’s key role in leading the way to a green global economy.

Adam Monroe, president of Novozymes Americas, was a keynote speaker at the 2018 UNC Clean Tech Summit.

Novzymes is a leader in the biological organism space. It relies on a diverse team of technical professionals to reduce the environmental impact caused by the agricultural, industrial, energy and pharmaceutical industries through the application of enzymes.

Monroe believes humankind taken significant steps forward through using modern technologies, but people still need to leverage tools found in nature to combat the impact that the modern age is having on the planet.

Monroe began with a simple question: “The redwood tree can consist of up to 2,000 tons of mass. Where does all of this mass come from?”

He explained that nature has developed a system of converting H2O and CO2 into carbohydrates using enzymes. Effectively, nature has found a way to reduce CO2 emissions in a process that requires no external energy source while proving positive externalities for the environment.

Nature has developed thousands of enzymes that are far more efficient than current manmade solutions, he said.

Using enzymes in the textile industry reduces the amount of water, electricity and chemicals required per batch. It provides a win-win-win scenario for the manufacturers, consumers and the environment. Manufacturers reduce the raw inputs needed per unit and can lower prices allowing them to become more cost competitive while maintaining margins. Consumers benefit by receiving the same quality products at lower prices. Environmental impact is decreased as less water, chemicals and energy are needed to produce the same volume of goods.

These impacts are not just realized at industrial levels. “Roughly 70 percent of the CO2 emissions involved in the process is due to the hot or cold water that is involved in washing the clothes,” he said. “The huge breakthrough in my field is the ability to wash your clothes in cold water and achieve the same results.” Applications at the household level, on a global scale, could lead to material reductions in total carbon emissions.

Monroe shared Novozymes’ “Global Goals,” and acknowledged the difficulty of quantifying the value that being environmentally conscious brings to a business. A differentiator for Novozymes among its competitors in the renewables space is its attractive returns, reporting a 25.6 percent ROIC in its 2017 annual report.

Monroe is excited about the prospects the future holds by leveraging these returns to promote renewable initiatives.

“Science is incredibly important,” he said. “While it’s human nature to chase the latest technological silver bullet, we have to pursue the opportunities with the information we already have.” 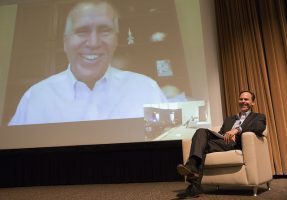 The solar industry in North Carolina started about 10 years ago and the state has since become the number two solar power generator in the U.S.

In the early phases of solar power development in North Carolina, U.S. Senator Thom Tillis was serving as a member of the North Carolina House of Representatives. He spoke about the challenges of implementing solar projects and his view that renewables would have a place in power generation moving forward. In 2010 a state tax credit for solar was slated to expire and Tillis was outspoken about the need to pass a bill for its extension. “These were the things that we were going to have to do to give the industry viability.”

There was significant push back from his Republican colleagues for his support on this issue but what differentiated Tillis from his colleagues was his view that absolutism on energy policy was not the answer. By avoiding demonizing language, and compromising with members of his own party and Democrats, he was able to construct a bi-partisan policy and incentivize collaboration on energy.

Till served eight years in the state house before he was elected to the U.S. Senate. Energy remains a priority for him and he says he is an advocate for reduced regulation on new technologies. “I think we can dramatically contract the regulatory system to expedite the way that new technologies can be tested, too,” he said.

He went on to explain that politicians in Washington frequently confuse what is good policy with partisan politics. Some fellow senators refuse to compromise at the risk of appearing to have betrayed their constituency, he said, and maintains his stance that policy does not have to be binary. “Let’s not do ‘It’s good or bad.’ Let’s find a way to minimize costs whether it’s a republican administration or a democrat administration.”

Reflecting on his professional experiences before he political career, he said his roles in research and development and consulting shaped his perspective on business and hone his analytical abilities. When asked what advice he had for those entering the workforce he replied, “What we need you all to do is not take the bait of getting your information from any one source. Sit down and take the time to rationalize it and consider the tradeoffs. Spend time understanding options analysis, risk assessment and risk analysis.”

The UNC Kenan-Flagler faculty and staff have echoed this sentiment, so I feel it is safe to say my classmates and I are headed in the right direction.