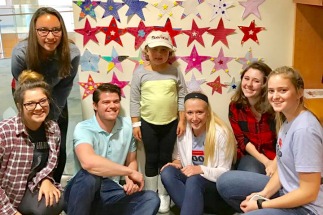 Undergoing treatment for pediatric cancer can be a daunting experience for patients and their families. But thanks to one Business School undergrad, some of UNC’s youngest and bravest patients are getting by with a little help from their friends.

As Cooper underwent treatment, Herman and her husband Justin (MBA ’05) discovered the unique challenges faced by pediatric cancer patients and their families. They also came to realize that few organizations provide the resources and assistance these families need most – and they were determined to help.

In 2010, the Herman family launched Super Cooper’s Little Red Wagon Foundation. Its apartment-style accommodations – dubbed the Super ReCOOPERation House – are a home away from home for pediatric cancer patients undergoing long-term treatment at UNC and Duke hospitals. It accommodates up to six families with apartments equipped with a private kitchen, sleep area and playroom stocked with disinfected toys. The Foundation also provides assistance with meals and transportation, a pediatric cancer resource center and a built-in support network.

When UNC Kenan-Flagler launched Business Cares in Fall 2014, it chose Super Cooper as one of three nonprofit partners supported by the initiative. Business Cares harnesses the talents and resources of the UNC Kenan-Flagler community – from business expertise to fundraising and a vast pool of volunteers – to help each partner organization achieve its mission.

After hearing Cooper’s story at one of the School’s first Business Cares service activities, Pritts and a group of volunteers from the UNC Kenan-Flagler community assembled care packages for Super Cooper patients undergoing treatment at UNC. By the end of the event, Pritts knew he wanted do more to support Business Cares – and he had a hunch his classmates would, too.

At the time, the Business Cares initiative was just a few months old and its inaugural efforts were focused on key projects and strategic objectives requested by the partner organizations. But Pritts saw an opportunity to build awareness and expand on the Business Cares mission with his vision for a buddy system. He approached Herman and pitched his idea to pair Super Cooper’s patients with UNC students who would serve as friends and mentors. The idea was a hit. 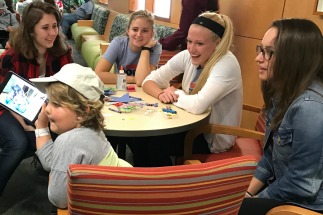 If there’s one thing Tar Heels have in common, it’s a heart for service – so Pritts expected a good response when the College Buddies application went live in Fall 2015. But the response wasn’t just good – it was incredible.

Pritts received more than 50 applications from Carolina undergrads eager to befriend pediatric patients staying at the ReCOOPeration Houses while undergoing treatment at UNC and Duke Children’s Hospitals. Pritts and his executive team conducted one-on-one interviews with every applicant to identify the best candidates for the College Buddies program.

“The things people shared with us – just based off of our mission and the work the foundation does – was incredible,” says Pritts. “We had to get creative and figure out a way for every student to get involved. We couldn’t turn them away.”

After selecting 14 students to serve as the inaugural group of College Buddies, Pritts invited the remaining candidates to become part of The Pit Crew – a group of volunteers that support the Super Cooper Foundation and the families it serves in a vital capacity. The Pit Crew, which doubled in size in 2016, serves the entire community through philanthropic activities – from dinners at the Ronald McDonald House of Chapel Hill to crafting at the UNC Pediatric Cancer Clinic.

The College Buddies program officially kicked off in January 2016. Super Cooper’s patients were ecstatic to meet their new friends, while families were grateful their children had something special to look forward to during treatment.

College Buddies visit the ReCOOPeration House every week and spend an hour of one-on-one time doing whatever their younger pal wants – from playing with Legos to watching a movie or doing each other’s nails. The visits provide pediatric patients with a sense of normalcy and the chance to simply be a kid while giving parents a respite – and even the chance for a much-needed nap – from their duties as caretakers. 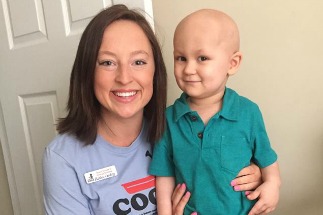 The simple act of friendship is incredibly powerful and makes a positive impact on a child’s experience with cancer. Pritts and his team have seen it happen firsthand.

Pritts and all but one member of the College Buddies executive team will graduate in May 2017. They’ve focused their senior year efforts on growing the organization to pair more children and students and provide additional opportunities for Tar Heels to get involved, with hopes of leaving a lasting legacy at Carolina.

“Our ultimate goal is to support as many kids who are fighting cancer as we can,” says Pritts. “We had one kid who waited for his buddy to get to the hospital so they could ring the bell marking the end of his treatment together. We want more of those experiences. That’s why we do what we do.”