Paying the MBA experience forward – in an unexpected place 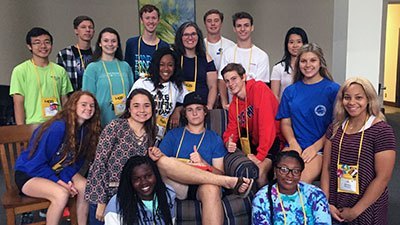 In Professor Chris Bingham’s Strategy class – a core curriculum requirement in the MBA Program – we were challenged to share what we learned with someone in the community who could benefit. His lesson was in my mind this summer as I traveled to a small college town in my home state to teach a workshop on entrepreneurship, economics and finance for teenagers.

Not many kids want to go back to school during summer vacation. Yet I found myself surrounded by a classroom of students eager to spend three weeks absorbing the language of business. The 16 students in my class belonged to a cohort of more than 70 rising high school juniors and seniors at the Mississippi Governor’s School, an academic enrichment program for gifted students.

Twenty-three states have Governor’s School programs, including North Carolina. While each is unique, what they all have in common is that they are publicly funded by state legislatures to provide a tuition-free college prep experience. Through Governor’s School, high schoolers are exposed to advanced topics they would not normally cover, with an emphasis on critical thinking and interdisciplinary activities.

I attended the Mississippi Governor’s School 14 years ago. At the time, the idea of going to business school never crossed my mind. I was determined to work in politics, and I mentally blocked off other career pathways that would have gotten in the way.

I didn’t seriously think about pursuing an MBA until I was 25. When I started researching MBA programs, I was stunned by the misconceptions I had had about business school – and worried that I had put myself at a disadvantage by assiduously avoiding the world of business in my single-hearted quest to change society through government.

Once I got to UNC Kenan-Flagler, I realized there was another way I could achieve my goal of effecting social change. I was just as excited about the intellectual stimulation it offered. I’ve always enjoyed a good debate and in business school, we were encouraged to ask provocative questions. Writing assignments weren’t about blustering your way through a five-page essay, but rather, succinctly delivering your assessment of a firm’s situation.

Most surprisingly, I discovered that doing the math was not an insurmountable barrier. In fact, the math made sense! Things I never realized would matter, like memorizing the formula for the slope of a line in junior high, turned out to reappear in everything from linear regressions to the capital asset pricing model.

I wanted to bring each of those aspects I loved about business school to my class at Mississippi Governor’s School. My students were capable of conquering everything from the time value of money to Michael Porter’s five forces – they just needed someone to show them the ropes. I took this role of mentor seriously. Mississippi ranks last among the states in per capita income and second-to-last in college degree attainment. While kids in New York and California might hear about venture capital deals at the dinner table, kids in Mississippi don’t have that privilege.

That’s why the Mississippi Governor’s School exists – to even the playing field in an intensive boot camp for the most talented students up for the challenge. It’s free so that no one is turned away – a critically important public service in a state containing the poorest counties in the nation. And it serves two particularly important populations – girls, who consistently outnumber boys in applications and attendance, and African-Americans, who make up 37 percent of Mississippi’s population, the highest density in the U.S.

Now, my 16 students know how to do math for coupon bonds and mortgages, and they know not only the difference between stock exchanges and stock indices, but also why 40 percent of equity trading volume now takes place on dark pools. They wrote up business strategy assessments of major Mississippi-based companies and performed consulting projects evaluating Mississippi’s viability as a business location using SWOT analysis.

When news broke of Amazon’s acquisition of Whole Foods during the middle of our session, we spent an entire class analyzing the deal. We learned about the financial crisis by role playing as executives, policymakers and middle-class Americans in another class.

My students made class fun with their curiosity and sense of humor. During our session on GDP, they made up a dance based on the YMCA for Y = C + I + G + X.

Their final presentation was the pièce de resistance. All by themselves, my students came up with a stock market game show, complete with a series of mini-games testing three audience members’ knowledge of prominent U.S. CEOs, the relationship of risk and return and game theory.

I could not have been prouder – that is, unless some of them end up going to business school at UNC Kenan-Flagler.

Emily Liner (MBA ’15) is a senior policy advisor in the economics program at Third Way, a think tank based in Washington, D.C.