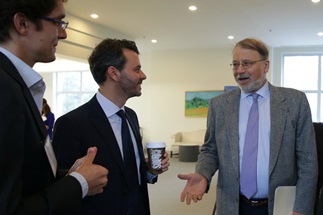 Paolo Fulghieri knows what it means when the light bulb goes on for a student. The finance professor has witnessed it firsthand with his Executive MBA (EMBA) and PhD students.

“Students will say, ‘I don’t feel like an alien anymore at these meetings because now I understand what the finance guys are talking about,’” says Fulghieri, Macon G. Patton Distinguished Professor and area chair of finance at UNC Kenan-Flagler.

“For me, it’s very satisfying,” he says. “I help them grow personally and professionally, and they gain confidence.”

The immediacy with which students apply what they are learning in the classroom at their workplace and report back about it makes the process all the sweeter for Fulghieri.

“The teaching informs my research, and the research informs my teaching,” he says.

First-year PhD students take his Intro to Corporate Finance Theories course to learn about the most important academic research.  In recognition of his outstanding work, Fulghieri received the Weatherspoon Award for Teaching Excellence in the PhD Program.

For the Evening and Weekend EMBA Programs, Fulghieri teaches Corporate Financial Strategy, which deals with raising capital in global markets and managing corporate financial structures. Students follow a company from start to finish, learning about the financial lifecycle of a corporation and strategies to create value.

A chemical company once asked him to create a new and improved way to teach project valuation skills because it was dissatisfied with what was available. After Fulghieri completed the course for the company, he revamped it for his EMBA students, integrating the tools they acquired in their core classes so they could build on them in his Advanced Valuation course.

“Some students say this is the most difficult course at UNC Kenan-Flagler, but it is also one of the most rewarding,” says Fulghieri. “So I feel good about it.”

Working at UNC Kenan-Flagler has been a pleasure, he adds. He taught corporate finance in the MBA and executive education programs at Columbia, Northwestern and Chicago. In 2002 he joined UNC Kenan-Flagler from INSEAD, where he also served as dean of the PhD program.

He enjoyed living in France, but after a while found the country wasn’t ideal for his wife and their then-young sons.

“France is wonderful for grown-ups but a bit difficult for children,” says Fulghieri. A stint at Chicago was also professionally rewarding, but the cold climate was too much for the family.

“Everything came together for us here at UNC Kenan-Flagler,” Fulghieri says. “For a European, Chapel Hill has an interesting combination of features. It’s more suburban than a major city yet lively and includes many universities and the Research Triangle, which means like-minded people intent on research are here. Plus, there are cultural marvels such as the Carolina ballet.”

“Carolina is fortunate to have attracted Paolo to the area. He is a wonderful scholar, an excellent teacher and a terrific colleague,” says Jennifer Conrad, Dalton McMichael Distinguished Professor of Finance. “He has been instrumental in building an excellent finance area. He also has the rare ability to work in a very rigorous and technical area of research, yet convey the problem and his results in an intuitive way that illustrates the importance of the topic.”

Students can be sure that a rigorous curriculum is not all they get when they take a course with Fulghieri. He relates to them because of their maturity and his understanding of “finding yourself” as you get educated. As a young man raised in Italy, Fulghieri was expected to choose his area of study at a much younger age than is typical in the U.S. His father and grandfather were physicians, so he was expected to take the same route. He began medical school right after graduating high school.

“The first course was Science of Tissue (Histology), and it came with a very long book,” says Fulghieri. “I never got to page five.”

That’s when he began talking to a friend who was studying economics. Fulghieri was attracted to the idea of a social science that would allow him to do math, one of his passions. He switched his major and earned a degree in economics from Universita’ Commerciale L. Bocconi in Milan. He went on to earn his PhD and MA in economics from the University of Pennsylvania, where he realized that finance was an area in which he could apply theory to real life corporations.

“That’s what clicked for me,” Fulghieri says. “In my research, I try to analyze relevant problems and apply theoretical reasoning to suggest solutions.”

Indeed, many of his projects have great relevancy. His research focuses on corporate finance, entrepreneurial finance and financial intermediation, with a lens on venture capital and initial public offerings (IPOs).

Fulghieri’s findings on the differences between risk and uncertainty in the banking sector are especially relevant as the U.K. deals with Brexit. People confuse the two terms. Risk refers to knowing the odds involved in a decision – being sure you have a fair coin toss that will give you a 50/50 chance of winning a bet, for example – whereas uncertainty is when you’re unable to know the odds involved – such as not knowing whether the coin is fair in the first place.

In times of uncertainty – such as following the 2008 economic crisis and in the wake of Brexit – people become more pessimistic and buy safe assets, says Fulghieri.

“There’s no reason to have that kind of behavior,” he says. “Uncertainty casts a shadow and can cause a bank run, systemic risk and a shock that propagates to the entire system. It can trigger a chain of events.”

Fulghieri also has done experimental work. In “O Sole Mio: An Experimental Analysis of Weather and Risk Attitudes in Financial Decisions,” he teamed up with Riccardo Colacito, a former UNC Kenan-Flagler professor, and UNC political science professor Anna Bassi to determine the level of risk taking in different climates. They learned that investors were willing to take more risks in sunny, warmer places and were more risk averse in cold climates. Maybe that’s why Silicon Valley became startup central.

Another study looks at the mechanisms for maintaining the integrity of credit rating agencies, which have been under fire since the financial crisis for having innate conflicts of interest. In addition, he’s working on a paper about uncertainty in innovation. For instance, a pharmaceutical company does not know the odds of finding a cure for a disease it plans to study, yet it must seek funding and carry on with the mission. Fulghieri is trying to better understand the implications of this type of uncertainty.

One thing is certain: Fulghieri knows about la dolce vita and invests in quality family time. He and his family like to travel and visit California – home to his wife’s siblings – and his native Italy, along with other European countries. They also like to go skiing.

“I learned to ski first and read and write second,” says Fulghieri.

Fulghieri has used his early passion for math to make an impact in the world of finance, sharing insights and best practices so business people can apply them to current challenges and prepare for the changing global landscape. For the teacher and scholar, la vita è bella.