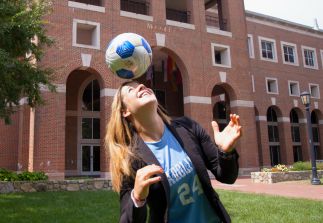 Paige Nielsen (BSBA ’16) has translated her drive and competitive fire from the soccer pitch to the business landscape. Her goal: to not only make an impact in other peoples’ lives, but to also make sure they can reach their full potential – and she’s using finance as a vehicle.

“We were a poor family,” explains Nielsen, a forward on the UNC women’s soccer team. “If you know what to do with your money, you can do greater things in this world. I think that’s why I got into finance.”

Nielsen’s desire to help others earned her the Eve Carson Scholarship in 2015. The scholarship, awarded to students who have exhibited passion and transformative growth during their time at UNC, funds half of the cost of attendance in their senior year and an additional $5,000 for a summer experience they proposed. Nielsen plans to use the award to organize a marathon to raise funds to establish a college scholarship fund for children of single parents diagnosed with cancer – a cause especially close to her heart after her mother’s battle with lymphoma.

When she began her first year at Carolina, Nielsen didn’t know what career path she wanted to pursue after college. “I just knew I wanted to make an impression somewhere,” she says. At the urging of a teammate, Nielsen – who’s always been good with numbers and people – met with Business School professors and decided to apply. When she began classes at UNC Kenan-Flagler, financial accounting immediately clicked with her.

Nielsen put her finance knowledge and business acumen to work during a summer internship on the global corporate banking and debt capital markets team at Bank of America, where she applied key components of her UNC Kenan-Flagler education.

She began each morning by writing a note to each of her coworkers about important developments over the previous 24 hours. Having the ability to quickly absorb new information and tactics – which Nielsen cites as one of the most important things she’s learned at UNC Kenan-Flagler – was a major advantage in the role. “It really gave me a competitive edge,” she says. “You’d think it would be hard to compete with interns from Yale, Princeton and Harvard, but UNC Kenan-Flagler really prepares you to compete in a sales role, as well as in a financial role.”

Nielsen also found that her experience on the soccer field translates well to the business world – from having self-discipline and a team-first mentality to maintaining a winning attitude and relentlessly striving for success. As part of their training, the UNC women’s soccer team participates in a process known as the Competitive Cauldron. Each player wears a fitness tracker that gathers data on how fast and hard they run by counting meters per second, and the results are posted every day for teammates to see.

The team also conducts peer evaluations each semester, ranking teammates on not just athleticism but character. The process develops leadership skills and transforms the goals set by each player. “It pushes us to be the best we can throughout the season,” says Nielsen. “We are driven to be best in class. We don’t just get soccer out of this – we get character and direction.” 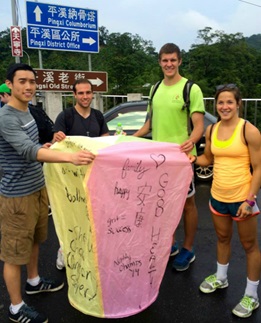 Being a business student provides Nielsen with incredible opportunities. One of her favorite experiences was traveling to China for a Global Immersion Elective, where she and a group of classmates spent two weeks visiting 17 companies to get a first-hand look at how business is done in the country. “I gained a better understanding of how business shapes other cultures,” she says. “We learned about a Chinese concept called guanxi, which means in order to get anything done you have to build relationships, versus the more capitalist approach we use in the U.S.”

The concept resonated with Nielsen, who notes that relationships have been an important part of her experience at Carolina. The mentorship and support of her peers and professors – including Chip Snively, who laid the foundation for her finance skills – has really set UNC Kenan-Flagler apart. “We connected on a personal level,” she says of Snively. “He is definitely one that I look up to, and I know he’s proud of me.”

Snively praises Nielsen as being a wonderful intersection of competitiveness, leadership and humbleness. “From day one in class, Paige established herself as an inquisitive, engaged finance student,” he says. “Through many conversations outside of class, I became more impressed with her initiative and drive, and the way she carries herself.”

It should come as no surprise that Nielsen – who knows a thing or two about what makes a great team – has thrived at a school known for its collaborative yet competitive community and emphasis on leadership, teamwork and excellence. She’s constantly impressed by how faculty, staff and students work together to achieve their goals and support every member of the UNC Kenan-Flagler. “People really bend over backwards for one another,” she says. “We accomplish so much more because of this.”

The tightknit Business School community has made a lasting impression on Nielsen. “I cannot express how much UNC Kenan-Flagler has impacted my time at the University,” she says. “When my mom passed away this last summer, professors and faculty kept reaching out to me to make sure I was okay. When I returned home to Nebraska, they sent the most beautiful bouquet of flowers in honor of my mom. I want to give back to this place because it is really something special.”