Outlets are more fashionable than ever 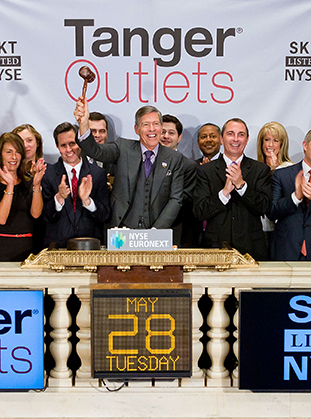 With roots dating back to 1918 — when his grandfather, Moe Tanger, founded Tanger-Creighton to sell excess merchandise from the family shirt business— the company had just seven outlet centers and little capital.

But what they did have was an idea. “We had a clear idea of what we wanted to accomplish, but like most entrepreneurs, no money,” said Tanger, who led the company alongside his father, Stanley Tanger. The three generations of Tangers previously worked together at Tanger-Creighton, which was sold in 1980. “We worked tirelessly.”

Tanger, today the chief executive officer and president of Tanger Factory Outlet Centers, gave the keynote address at the third annual UNC Retail Conference on Feb. 28. Organized by the UNC Kenan-Flagler Retail Club, the conference brought together students and business professionals for discussions on ongoing changes and challenges in retail.

Tanger Factory Outlets has grown into a company with a $4.5 billion enterprise value and more than 40 outlet centers since its founding more than 30 years ago.

“This daring move of going public opened the doors for our outlet company,” Tanger said. “Having built a balance sheet that’s a fortress, we’ve been able to grow rapidly.”

The brands Tanger partners with have embraced their place in outlets, which have become an extremely lucrative business channel for most companies. “Brands noticed an opportunity,” he said. “People shopped all year long at outlets. The outlet channel is one, if not the most, profitable division of their company now.”

Consumers are increasingly value-minded and aspirational when shopping: they want brands outside their price range at a bargain. “This shift in consumer mindset has changed retail forever,” he said. “Outlet shopping is more fashionable than ever.”

The recession has left many retailers struggling, but outlets — which offer premium brands and a compelling value proposition — have only gotten stronger, Tanger said

“When you read the papers today, you’ll see a mixed picture of retail,” he said. “Outlets definitely benefited from the recession. In good times, people like the bargain. In tough times like these, people need a bargain.”

Tanger is confident about the future of the company. This summer, Tanger will open an outlet center in Charlotte – and with that opening, the firm will have created over 2,500 jobs in North Carolina.