On the fast track to success 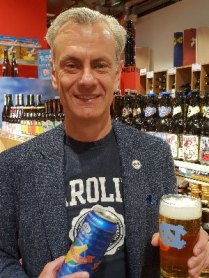 A native of Switzerland, Stefan Mueller (MBA ’95) completed his undergraduate studies in Zurich but knew he wanted to continue his education with an MBA degree.

Deciding that the best value was to get a degree abroad, his challenge in the pre-internet era was to find the best business school for him.

“It was important to have a degree from a business school in the top 20,” says Mueller. “My wife and I had two small children at the time, and I didn’t want to go to a large city. Chapel Hill was the perfect setting for a family and to focus on studying without too many distractions.”

As Mueller settled into the full-time MBA Program at UNC Kenan-Flagler, he knew he had made the right choice: “It changed everything about my life. It was a completely different learning attitude.”

The School’s case-based approach, combined with the proximity to students and professors along with the group work made all the difference, he says. “I felt that UNC really wants you to succeed. It seemed different from my experience in Switzerland, where the university doesn’t care if you succeed or not. It was a different mindset.”

After completing the program, Mueller wanted to find a job back in Switzerland with a U.S. company, and his UNC Kenan-Flagler degree helped him tremendously. “U.S. companies there realize the value of an MBA degree back in the U.S. They wanted to have Swiss with a U.S. mindset – someone with a degree who knew how to focus and deliver.”

He wanted to go into consulting, ideally with a large organization that had a small presence in Switzerland. “Deloitte was a large company worldwide but virtually unknown in Switzerland at the time. I figured if I joined this company, the future was going to be bright, and it was.”

During his decade with Deloitte, from 1995-2005, the Switzerland office grew from five to more than 130 consultants. His roles as senior manager and deputy head of financial services took him to assignments in more than 30 countries.

But back in 1995, Mueller left Chapel Hill with more than a new MBA degree. He also had a new business idea that would serve him well.

“When I was studying at Carolina, I saw that the whole beer market was changing,” says Mueller. “We did a small group study during the MBA Program about the beer market, and I knew that the whole microbrewery trend would come to Europe at some point. That was a bet.”

In 1996, Mueller rented a small retail shop at the Zurich train station, and his company, Drinks of the World, was born.

Drinks of the World is a specialty retail store for beers, wines and liquors located in train stations. Since Mueller opened the first store in Zurich, the company has grown to include nine locations across the country and more than 100 employees. The stores offer a selection of 2,000 beverages, specialized in beer.

“We have the largest beer selection in Switzerland and people know us for that,” says Mueller. He says the company sells to an average of 1,000 people a day per store. On Saturdays, when many are traveling by train, they serve about 3,000 total.

“It is high volume and high traffic,” says Mueller. “The train station in Zurich is in the top five in Europe for volume of passengers, seeing close to 500,000 passengers per day. We have only nine stores in Switzerland, but I’d say about 80 percent of young people know us.”

After juggling this venture with his work at Deloitte for 10 years, Mueller came to a turning point. “I did the math and calculated that on my business, we could survive. At the beginning, we needed the salary from Deloitte to put into the business, but after opening the third location, we realized that wow, this works – this has scaled. It was then clear that I could make a living out of it.”

His advice to others dreaming of starting a business? Don’t wait until you are older. Test your model as soon as you can.

“If you want to be an entrepreneur, you feel it,” he says. “And if you have that feeling, do it early – don’t wait too long. If you look at most successful entrepreneurs, they started early in their 20’s. Sometimes it’s just that you have naive ideas and you are persistent and want to make it work, and that’s good.”

What Mueller enjoys most about his work is being in control of his own schedule. And he is grateful for his UNC Kenan-Flagler education and the time he and his family spent in Chapel Hill. He shows his appreciation by being a member of UNC Kenan-Flagler’s Dean’s Circle, a giving society for those who give $1,000 or more annually to the School.

“UNC Kenan-Flagler definitely changed my life so much. Basically, I took the degree back to Switzerland, and it helped me get a job at Deloitte. So without UNC my life would be totally different. I realize that and feel very thankful and humbled. That’s the main reason why I want to give back every year.”

His message for others is along the same lines: “Think how much you gained from the School and how your life would be different without it. I think for most people, it made a big difference. It’s time to give back.”