Skip to content Skip to Programs Navigation
On the ball: Loren Shealy

On the ball: Loren Shealy 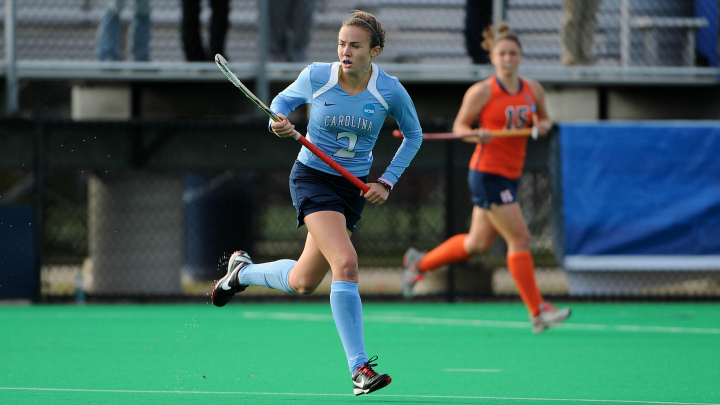 Whether she is stepping out onto the turf for the field hockey ACC title match or taking her seat to start a business exam, Loren Shealy (BSBA ’14) approaches all avenues of her life with excellence in mind.

“When I sit down to study, or go out on the field to train, I have the same mentality,” she says. “Give 100 percent to everything that I do.”

And clearly she does just that. Shealy has been recognized nationally for both her athletic and academic success. As a student, Shealy is a Robertson Scholar – the first UNC student athlete ever to earn the prestigious scholarship – studying finance at UNC Kenan-Flagler. As an athlete, she has earned many awards for her performances with field hockey, including being selected for the ACC All-Tournament Team and the All-ACC Academic Team. Shealy was named Sports Illustrated’s first ever “Female College Athlete of the Year” and the ACC’s Field Hockey Scholar-Athlete of the Year in 2013.

As a junior at UNC Kenan-Flagler and member of the UNC Field Hockey team, Shealy has earned two consecutive ACC titles during her Carolina career, and her team reached the NCAA finals three years in a row. Not only has she achieved some of the most elite athletic feats, but she has done so while maintaining a perfect grade point average (GPA). In fact, Shealy has twice earned the NCAA Elite 89 award, which recognizes players with the top GPA at each sport’s NCAA championship finals.

Her teammates and coaches describe her as a hard worker. With a personal motto of “nothing can be done too well,” Shealy has proven herself to be a committed teammate and star Tar Heel.

Her interest in studying business was influenced by her father’s career as a banker, but she traces her attraction to the UNC Kenan-Flagler to her teammates. “When I came to Carolina, I was quickly pointed to UNC Kenan-Flagler by a couple of my teammates who were business majors and had nothing but great experiences,” she says.

Her strategic and technical skills on the field hockey field carry over to the classroom. She chose to study finance for the technical knowledge and skills needed to succeed in the field. It also appeals to her because it opens a creative side of business, allowing her to approach problems from many different angles, she said.

After she was admitted into the top-ranked Business School, Shealy discovered her love for the challenging classes. She is excited about how the she can apply what she learns to the world outside of Carolina, as well as the flexibility she will have to explore a variety of career opportunities after graduation, which she was able to explore during a summer internship with private equity firm Texas Pacific Group in San Francisco.

Shealy hopes to use her business skills to work internationally. The idea of running a non-profit to help alleviate poverty globally appeals to her.

“While this may sound like the aspirations of many smart, young women, Loren gives us reason to believe that she will be able to accomplish anything that she sets her mind to,” says Anna Millar, senior associate director of admissions, recruiting and advising for the Undergraduate Business Program.

Shealy values the people at UNC Kenan-Flagler. “My professors have always gone above and beyond,” she says. “And I have learned so much from working in groups with my classmates.”

The respect is mutual. Her professors describe her as a “splendid young lady,” humble and well-liked. Accounting professor C.J. Skender says that she arrived early to his classes, always sat in the front row and finished at the top of each.

“She actively participated and emerged as a leader in the classroom,” Skender said. “A student like Loren comes along only a couple of times in a teacher’s lifetime.”

“She’s confident, personable, intelligent, conscientious, organized, driven and competitive,” says finance professor Chip Snively. “You name the superlative, you’ve got Loren Shealy. UNC and Kenan-Flagler are very fortunate to have Loren as student and representative of our programs” he says.