Of lessons learned and returning “home” 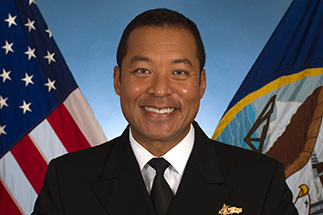 Here’s the story: Epps’ father was a career Navy man. The family thus uprooted regularly. Epps was born in Canada and calls Pensacola, Florida, home, but only because it’s where he graduated from high school.

He hadn’t planned to continue living a peripatetic life – hadn’t figured on joining the military. But the U.S. Navy beckoned with an undergraduate scholarship to Vanderbilt University, an offer he couldn’t refuse.

And so, here he is – a captain, commanding the Naval Supply Systems Command Fleet Logistics Center in Pearl Harbor – 27 years a Navy man, having seen the world, but not yet home.

Epps came to UNC Kenan-Flagler in 2000, having been offered a full-ride fellowship to the full-time MBA Program by the Navy. The only requirement was that he had to attend a top 20 business school.

At the time, he knew only a couple of things about UNC. He remembered being told by a high school teacher that if he wanted an Ivy League-type experience, UNC was well worth considering.

And then there were more recent impressions.

“Every time I met a UNC alum or heard about the School, everyone was so effusive in their praise and adoration for the School. I remember thinking, ‘What Kool-Aid are they giving these folks to drink?’”

When he visited, he found the “people and the dynamics of the program were very appealing.”