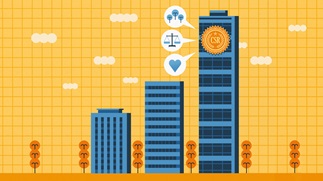 Good & Proud Co. has implemented environmental sustainability programs across all its business units and is well known for its philanthropy. Considered a leader in CSR, it uses an annual report and aggressive public relations to communicate its actions.

Green Wash Inc. is a chemical company. Its CEO regularly gives public speeches on the importance of environmental sustainability, but employees privately complain that despite what company leadership says publicly, its factories are no more environmentally friendly than its competitors who don’t talk about the environment.

Finally, there’s Leave No Trace Industries. The company has spent hundreds of millions of dollars to ensure its operations meet the most stringent environmental standards. It also donates millions of dollars, through employee matching funds, to charitable organizations in communities where it operates. But it eschews any publicity on these topics, instead choosing to focus PR efforts on its core business.

Though these companies are fictional, their respective CSR strategies are not. Olga Hawn, a strategy and entrepreneurship professor at UNC Kenan-Flagler, wanted to know what impact these three distinct strategies might have on shareholder value. She and Ioannis Ioannou of London Business School examine this question in their paper, “Mind the gap: The interplay between external and external actions in the case of corporate social responsibility” in Strategic Management Journal.

When CSR helps – and when it doesn’t
In the last 20 years, a growing vein of research has shown that companies increasingly see CSR as a key component of their ability to be strong, sustainable businesses in the long run. Research also has found that there is a strong positive correlation between company CSR activities and share price, note Hawn and Ioannou.

But so far, researchers have shed little light on what kinds of CSR activities are actually most important. Hawn and Ioannou dug into that question by asking what kinds of actions might have the most impact on shareholder value. Specifically, Hawn says, they were interested in whether internal company actions – such as policy changes and board committees – were more or less important than external actions, such as communicating about CSR initiatives to audiences outside the company.

To answer these questions, the researchers tapped a global database of public company CSR data maintained by Thomson Reuters, as well as publicly available data on company stock prices. The CSR data is based upon some 900 evaluation points for each firm, which Thomson Reuters’ analysts then turn into a score. As a consequence, each firm in the database can be compared to other firms based on the relative intensity of their CSR activities. Hawn ended up with a sample of 1,492 firms in 33 countries over seven years (2002-08).

The researchers used Tobin’s q, a measure of the premium the market provides to a company’s stock price, versus the book value of the company’s assets to assess CSR’s impact on shareholder value.

Somewhat surprisingly, Hawn says, the majority of companies in their sample actually seem to have higher levels of internal than external CSR activities.

“It seems like companies don’t want to brag about it because they’re afraid the more visibility they have in this area, the more likely they are to be criticized,” Hawn says.

Not minding the gap
As expected, shareholder value is positively correlated with the overall degree of CSR activities when the sum of both internal and external actions was considered. That finding suggests that Good & Proud Co. would likely see a boost in its share price compared to its peers.

The gap arises in two ways. In one scenario, exemplified by the hypothetical Green Wash Inc., a company is much more active with external CSR actions than internal. In the second scenario – which is surprisingly more common – the gap between internal and external actions arises when the company doesn’t communicate everything it’s doing internally to external audiences, as in the case of the fictional Leave No Trace Industries. Here too, a bigger gap is associated negatively with shareholder value. But in this case, the gap arises because the company fails to communicate with external stakeholders – including investors – about its CSR efforts. As a result, investors don’t have the knowledge they need of the company’s CSR activities to provide it an appropriate CSR premium.

How much difference does the relative gap appear to make in shareholder value? Quite a bit.

In other research, Hawn and colleagues are using data from the Dow Jones Sustainability Index (DJSI) to examine how investors value CSR. They are finding that firm performance appears to moderate the otherwise positive impact of CSR. Firms with lower financial performance – assessed through factors such as profitability ratios and analysts’ buy recommendations – gain more when they’re put on the DJSI and lose more when they’re taken off. On the other hand, stronger performing firms benefit and suffer less when they increase and decrease their CSR activities.