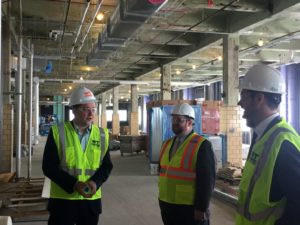 The resurgence of Durham, North Carolina, has been well-documented, from the rise of technology startups to the growth of the American Tobacco Campus and increased commercial activity downtown.

The next chapter in this transformation is being driven by the life sciences industry, which is converging in the Brightleaf neighborhood just a few blocks from Duke’s East Campus. At the core of this revival is The Chesterfield, a 284,000 square foot adaptive reuse project being developed by Wexford Science & Technology. The UNC Kenan-Flagler MBA Real Estate Club had a chance to visit the development on one of our Spring 2016 career treks.

Once home to Liggett & Myers Tobacco Company, the building now dubbed The Chesterfield (after one of L&M’s famous brands) has been completely reimagined by Justin Parker, a senior project manager at Wexford. His vision for The Chesterfield includes a combination of office and lab space (up to Biosafety Level 2), with ground-floor retail fronting Main Street. While the façade will remain largely unchanged due to its designation on the National Registry of Historic Places, the buildings’ interior will be brought into the 21st Century.

The atrium of The Chesterfield

The most significant update is the six-story, 3,500 square foot atrium being carved through the center of the building, adding ample drama and natural light. On the first floor, Wexford has planned a life sciences incubator featuring state-of-the-art lab space to be shared by small business tenants who lack the resources to develop this type of infrastructure on their own. These coworking spaces not only attract entrepreneurs, but also draw large life science companies who want to be in areas where cutting-edge research is happening.

The notion that innovation and collaboration are not just for startups is central to The Chesterfield’s unique value proposition. By bringing together complementary businesses at various stages under one roof, Wexford hopes to create an environment where employees informally dialogue across firms and the cross-pollination of ideas occurs naturally.

The strategic effort to achieve an optimal tenant mix is commonplace in retail real estate but represents a novel approach for an office development. Wexford has reason to be confident it can deliver this value, as it has already done so at Wake Forest Innovation Quarter in Winston-Salem, North Carolina, and Innovation Research Park @ ODU in Norfolk, Virginia. As students witnessed firsthand, Wexford is already proving itself at The Chesterfield, spurring life science companies to charge into Bull City.