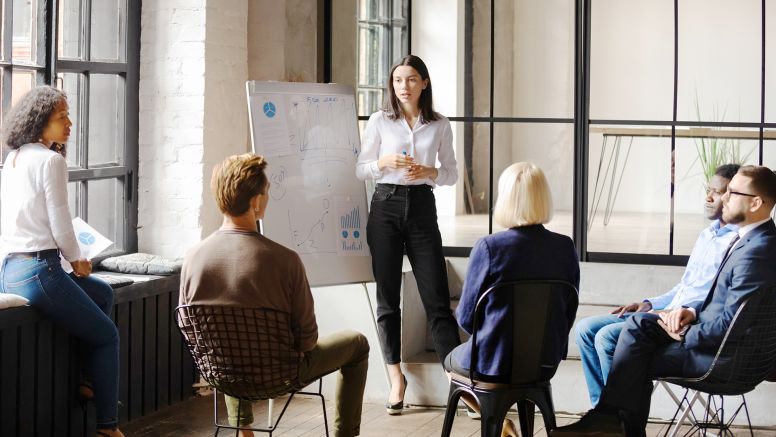 Teams bring multiple perspectives and skills to business challenges. Good teams work, in part, because members know and trust each other. This internal team identification enables them to work together efficiently and effectively.

But teams sometimes get stuck in unproductive strategies and behaviors – and committing more resources to their approach even if it isn’t working. Researchers call that team “escalation of commitment.”

Leadership change is generally considered disruptive, but might there be a positive aspect to it?

What happens to that team dynamic? Does getting a new leader help teams re-examine their plan of action and potentially pursue improved strategies?

Hanna Kalmanovich-Cohen (PhD ’20), Matthew Pearsall, associate professor of organizational behavior, and Jessica Siegel Christian, clinical associate professor of organizational behavior, explored those questions. They conducted studies to see if leadership changes affected team commitment to unproductive courses of action and published their findings in “The effects of leadership change on team escalation of commitment” in The Leadership Quarterly.

The food truck gets a new boss

During the first study, they divided 132 business students into 44 three-member teams for an online simulation. The goal: Maximize food truck revenue over six weeks by deciding which locations to send their truck to and for how long.

At the end of the first phase of the simulation, new leaders (who had previously been working on the task with a different team) were assigned to half the teams, while half continued with their same leader. At the start of second phase, all teams discussed the results of their first phase and decided if they wanted to change their approach.

The researchers measured the extent to which the teams used different tactics during the second phase. Sure enough, teams with new leaders made bigger changes to their strategy, spurred on by the review of their earlier results with a new leader.

Leaders are often involved in formulating a strategy and so can end up just as committed to a bad approach as their team, says Christian. In fact, they might be even more committed to it, feeling it reflects on their own leadership effectiveness. But with a new team, leaders are free of any personal commitment to prior decisions.

A change in change management leaders

A second study involved 255 business students broken into 50 small teams. For each team, one member was randomly designated as the leader, responsible for ensuring all members participated and guiding their decision making. The teams worked together all semester on a series of projects, creating a strong sense of team identification.

Toward the end of the semester they participated in a change-management simulation over three sessions, playing the role of change consultants for a business facing declining revenues and market share. Teams studied the situation and planned their approach during the first two sessions, and implemented their strategy in the third session. But in between the second and third sessions, half the teams got new leaders (who had been working with a different team).

The teams got real-time feedback on the effectiveness of their approaches and had the option to change tactics. They could, for example, increase the number of change tactics that were working or they could replace poorly performing tactics with other choices.

The result: Teams with new leaders were less likely to escalate their commitment to poorly performing tactics and more likely to reduce errors by replacing poor tactics with better ones. Those teams also, on average, scored higher in the simulation.

How teams adapt to different types of changes are the subject of in-depth studies by Christian and Pearsall. They have shown that a team’s processes predict the adaptability of its performance, and this study shows how an external change can affect those processes.

When teams get new leaders, they invariably engage in more reflection and discussion about the work they have been doing and the results they have produced. Because the new leader isn’t invested in previous approaches, teams are more likely to recognize problems with the way they’ve been working and make changes to improve results.

“A new leader helps to break that team out of a potentially dysfunctional cycle of escalation,” Christian says. “We’re forced to articulate our thought process and why we’re doing certain things.”

Leaders can play an important role in enhancing how teams adapt to change, says Pearsall. “If they ensure that their employees are aware that the leadership change could result in the reevaluation of their current practices, the team’s decision-making processes could improve. It might also increase the chances that they recognize the value of the transition and encourage them to be more receptive to new ideas and make the transition smoother.”

Demonstrating that a new leader can actively influence the team performance shortly after taking over an existing team also might help management better plan leadership transitions.

Unless a company already has a very strong culture of regularly assessing its approach and making changes, reflective activity spurred by a new team leader can be a silver lining to an otherwise disruptive change in leadership.