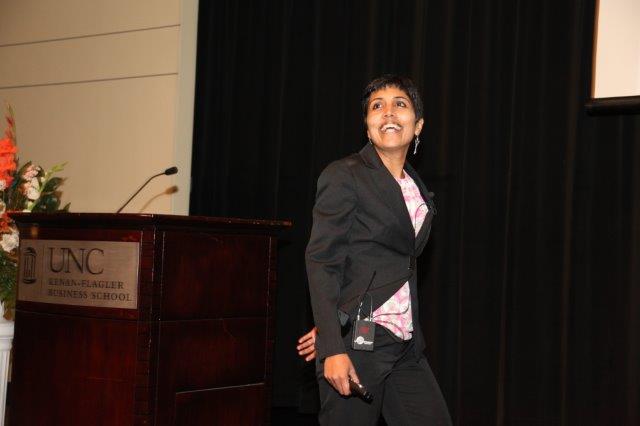 When Sreedhari Desai asked attendees of the Carolina Women in Business conference how many of them were comfortable negotiating, few hands went up.

Many women don’t know negotiating is an option or are uncomfortable negotiating out of fear of rejection, losing a relationship or concerns about self-esteem, said Desai, an organizational behavior professor at UNC Kenan-Flagler.

“We have been negotiating really well in some domains of our lives but not so well, perhaps in the professional sphere,” Desai said.

Desai demystifies negotiating. One myth is that negotiators are born. Desai cited research that found personality traits are not as predictive of negotiation outcomes as one might expect. “The situation often seems to have the upper hand,” Desai said.

Another myth is that experience is a great teacher for negotiation. Getting good feedback in negotiation situations is difficult, Desai said, those women negotiate with are not typically forthcoming with tips to help with improvement. Women also tend to seek confirmation instead of learning from mistakes, Desai said.