Navigating your career in a male-dominated industry 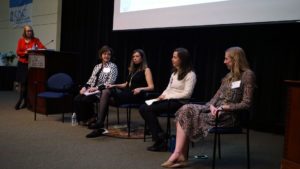 With many of the panels and workshops addressing traditional topics like communication, retail, real estate and leadership, a slightly more controversial topic stood out: Women in male-dominated industries.

Four successful businesswomen shared their insights on gender-related concerns, experiences working in male-dominated industries and ultimately inspired other women to prevail against adversity.

In your view, what are defining characteristics of a male-dominated industry?

Glenda Eilo, director of strategic marketing and innovation at Eastman Chemical Company: “I think it’s dominated by results orientation, a level of competition and a level of maybe being uncomfortable with emotion or passion.”

Michelle Gauchat, (MBA? ’16), senior manager at Deloitte Consulting: “I think there is a level of directness and succinctness that I’ve had to train myself to be ready for. I also think, whether we like it or not, appearance is really important, and I hate to say that. You have to look good, but you can’t look too good.”

Roxanne Bras, former civil affairs officer of the U.S. Army Special Operations Command and an entrepreneur: “People are curious about the experience working in a male-dominated industry, but not so much about being a woman doing that.”

Rebecca Wren (MBA ’16), associate at JP Morgan.: “In response to the directness you have to get used to, you also have to be really unafraid to go after opportunities you want, rather than waiting for the opportunity to come to you, because your male counterparts will jump on it faster than you.”

Do you enjoy working in these male-dominated industries? Would you recommend them to young women or your own daughters?

Rather than thinking it’s a misfortune to be a woman in misrepresented workplaces, Gauchat says women should embrace the challenge as something that is attainable and will propel women toward success.

How would you advise others to deal with issues regarding sexual harassment?

Having forums like social media is important for creating dialogue about the issue, said Gauchat. Even though it’s often difficult to verbalize, talking about it makes it easier.

Sharing experiences and having outside and objective perspectives can help you decipher what is or isn’t right.

If you don’t want to legally approach a situation, what are other solutions?

While confrontation is difficult, it’s important and necessary.

There is more than one way to approach any situation, said Eilo. You can walk away from situations or have conversations. When talking, clearly state what you’re going to accept and what we’re not in the working relationship.

Despite how hard these conversations might be we can still be respectful and polite, Elio said

Regarding social media, Wren suggested that these platforms create an environment where women can talk to each other. Yet despite how advantageous this service is, conversations are rarely had immediately and instead expressed long after conflict.

“We need to create an environment where a woman can say something right now and not be stigmatized,” said Wren. “We need to turn the progress we’ve made into something that is a really positive next step.”

How can I get taken more seriously as a younger employee?

For young employees, a common setback is not being taken seriously by more experienced colleagues. Don’t let that stop you from succeeding – let it inspire you to do better.

“I go after harder projects, I try to show them my skill that way,” said Wren. “But you have to show different aspects of what you’re able to do.”

Gauchat has a different approach.

“Go externally and get industry designations,” she said. “Know your market worth. It’s very okay to go out and interview. You should take any interview that you have. You should be behind a glass door and know what your worth is because that’s really powerful. Don’t be afraid to use it.”

What is advice you would provide for men who are interested in being allies for women?

One of the most important solutions to combating gender-related issues in the workplace is educating both males and females. While it is important to provide advice and resources to women, it is equally important to educate men on how to be better allies and colleagues.

Eilo suggested that men follow “The Golden Rule” of treating others how you want to be treated.

Wren proposed that it’s important to always pay it forward. “People that have treated you well or that have done things you admire, try to emulate that in what you do every day in your office,” she said.

Bras recommended that men speak up for their women colleagues. Given her experience in the U.S. Army, she said male voices challenging particularly bias viewpoints holds a lot of value.

While society has come a long way regarding gender-related issues, there is still work to be done. Opening up discussions to difficult situations paves the way for change.

For women, it’s important to know their worth, confront adversity and be good listeners for their peers. For men, advocating on female colleagues’ behalf is a simple way to incite change in any male-dominated workplace.

“Understand that sometimes you have to moderate in order to be successful,” said Eilo.

“It is a long game. Your career is a marathon.”