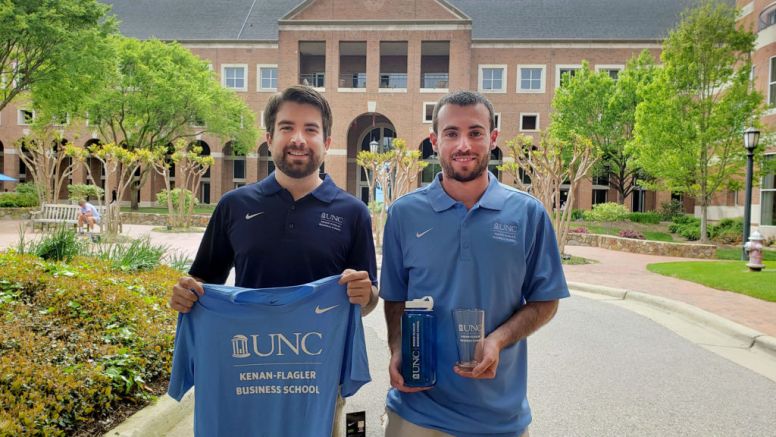 Getting into the school of your choice is an exciting time. There’s a sense of pride and a desire to celebrate it with others by buying and wearing garb from your new school. That’s how the concept and creation of the UNC Kenan-Flagler Student Store came about.

Most universities’ student stores provide a plethora of gear to accommodate anyone and everyone, including specialized gear for students in specific schools. But when Tim Ryan and Kyle Pinheiro (both MBA ’17) tried buying UNC Kenan-Flagler gear, there was little to choose from. That’s when they came up with the idea of the Business School’s student store.

“It was really their vision. Other business schools had a student store to sell branded gear to their students and alumni and UNC Kenan-Flagler did not,” says Matt Bartsch (MBA ’19), who began co-running the student store with classmate Zach Stone (MBA ’19) as second-year MBA students in fall 2018. Ryan and Pinheiro realized there was a market for Business School branded gear and they formed the small business thanks to funding from the MBA Student Association (MBASA).

“They received a grant and went out and purchased a couple of items: hoodies, sweatshirts and T-shirts. That’s how the store began, primarily selling to students,” Bartsch says.

Three years later, the store has grown from just two MBA students to a staff varying from five to seven students. In addition to expanding their staff, Bartsch and Stone have expanded the store’s products. They’ve moved into more high-end clothing like Patagonia sweatshirts and Nike polos as well as drinkware.

Originally the store sold primarily to students at lunchtime at Café McColl. But beginning in 2017-18, the store also began selling at events to target alumni and online students, which together now makes up 80 percent of their total annual sales.

“This year’s goal was to grow sales at events by selling are more events and adding products to our inventory,” says Bartsch. “We get emails all the time from alumni and students who study off-campus and can’t get to the School but want to buy and wear UNC Kenan-Flagler branded clothing. We’re hoping next year’s growth comes from our online store.”

The MBA students developed a marketing website for customers to browse products. It also includes contact information and how to order online.

The priority for next year is to get the online store up and running with a standardized shipping process. For now, the marketing website is available to check out what’s in stock. And when you order online, Bartsch and Stone ask for a little patience with delivery.

And with any store, there are items that have broad appeal and others that might sell to niche customers. But how do they determine what to sell? A lot of their decision-making comes from listening to customers.

“Every time we’re selling and a customer says, ‘Do you have this shirt in this color?’, we make a mental note,” says Stone. “Or they’ll ask, ‘I see you have coffee mugs but do you have pint glasses?’” Stone says one of the reasons they began selling pint glasses was to have items that could be versatile. 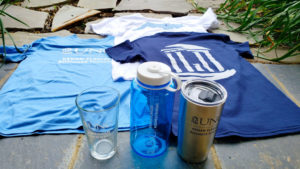 Some of the merchandise sold through the UNC Kenan-Flagler Student Store.

“What might sell well to students might be different for alums,” says Stone. “They’re looking for different types of things. Something like a pint glass straddles both groups and is also nice to give to guest speakers.” Most career clubs host conferences and bring in speakers or judges and they want to give them a keepsake as a thank you for coming to the School. With items like glasses, mugs or water bottles, they don’t have to worry about different clothing sizes.

And where do all the profits go? The goal is to have the profits go back to the School and help students pay their MBA activity fees.

“We’re still in the growth phase, but the vision is once we get this online store up and running, the profits will go back to the School,” Bartsch says. Right now, the profits are going back into the store for new products and the store’s expansion.

The store also provides hands-on experience for its managers. It’s not a paying job; it’s really about gaining the experience of running a small business say Bartsch and Stone.

They are learning about at supply and demand, as well as managing inventory.

“We look at what sells well from our current stock,” says Bartsch. If they carry something that’s not selling well, they determine whether to keep selling that item and what to replace it with.

“For example, this year we sold Patagonia items with Net Impact and we completely sold out in one weekend with the online MBA students. It was incredible, so we plan on expanding it next year,” Bartsch says. They’ll look at adding different colors and new styles.

For Stone, the skills he’s learned while co-running the store have been extremely applicable to his school work and will be valuable at McKinsey where he’ll work as an associate in Charlotte. Although he concentrated in consulting, during his summer internship at McKinsey his first project was a retail project. Stone says managing the store forced him out of his comfort zone. “We just had to be versatile,” he says.

“I didn’t come to business school thinking I would get to practice designing T-shirt logos,” says Bartsch, who focused on technology at UNC Kenan-Flagler. “In our jobs after school, we’re not just doing finance and marketing; we might get weird, wacky tasks that are outside of our wheelhouse.” And he’ll be more equipped to tackle them head-on as he moves to Sunnyvale, California, to work as a project manager for Facebook’s safety group.

And for future students wanting to gain start-up experience, they recruit every fall.