More luggage, more problems? Not when it comes to flight delays 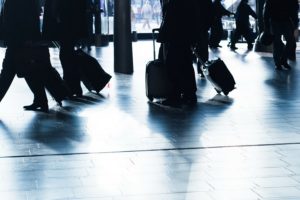 During the Great Recession of 2007-08, most U.S. airlines implemented fees for checked bags as a means to provide new revenues and cut costs. As a result, more fliers chose to stow their luggage in the main cabin – and many believe that subsequent boarding delays could contribute to flight delays.

But do checked bag fees and the subsequent increase in carry-on luggage really lead to more frequently delayed flights? The answer, surprisingly, is no.

In fact, the introduction of checked baggage fees has actually reduced delays – sometimes even for airlines that didn’t implement the fees. UNC Kenan-Flagler professor Vinayak Deshpande – along with Mariana Nicolae of Eastern Michigan University, Mazhar Arikan of the University of Kansas and Mark Ferguson of the University of South Carolina – analyzed data on flight delays before and after the implementation of fees for both the first and second checked bags. Their findings, “Do bags fly free? An empirical analysis of the operational implications of airline baggage fees,” will be published in Management Science.

As checked bag fees became more common, passengers avoided checking their luggage. And even when there is no extra cost involved in checking bags, we’ve adopted the habit of traveling with carry-on bags only.

So Deshpande and his co-authors also looked at what happened on routes flown by airlines that didn’t charge for checked bags – such as Southwest Airlines – when a competitor flying the same route did.

Surprisingly, even in that scenario, departure delays still improved.

After passengers check their bags, the luggage must go through a security screening before being transported and loaded onto the appropriate plane. Because the personnel and equipment that provide these services are often shared by airlines, reducing the number of checked bags traveling through the airport in turn reduces congestion and delays, ultimately resulting in on-time performance for the airlines that share these services.

The bottom line: Although you might dislike waiting for people to stow their carry-on bags in the main cabin, it’s usually not going to delay your flight.