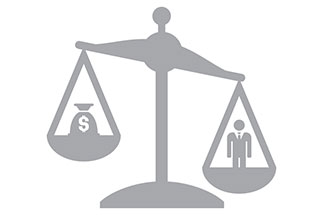 But what can you do to reduce turnover? Conventional wisdom suggests money and managers have significant influence on if employees stay or go – but is one more important than the other?

“Once you know how compensation, management and other factors affect employee attrition, you can decide how much to invest in each – which gets to the challenge and options for managers,” says Brad Staats, associate professor of operations at UNC Kenan-Flagler.

Their model not only answers the money vs. manager question – it also suggests ways to predict and reduce turnover. They share their findings in “A Structural Estimation Approach to Agent Attrition.”

Modeling attrition
Using data from an Indian business process management (BPM) company, Staats and Emadi built a statistical model. They collected individual demographics, salary and employment data for 3,680 workers in a single BPM contact center in India over five years, and compiled macroeconomic data about the Indian economy during the same period.

Then they used the data to build a structural model that looks at how factors – such as salary, who an employee’s manager is, and non-monetary work conditions – affect both voluntary and involuntary turnover. The framework not only yields a robust, predictive model, but also can be used to examine policy changes and how individuals would respond to them.

BPM companies provide back-office support – handling functions such as data entry, technical support or customer service for other firms. The market for such services was worth about $186 billion in 2015, and India accounted for 38 percent of that market — more than $70 billion.

No matter what industry you work in, chances are you’ve dealt with an Indian BPM at some point, such as calling your credit card company or seeking tech support. For workers, hours can be long and providing customer service can be stressful. Turnover in the industry is high — 50 to 75 percent annually for Indian BPMs. For these companies – and the clients depending on them – reducing turnover promises considerable economic benefit.

What matters most?
Emadi and Staats found the two most important factors in whether employees stayed in their jobs were salary and who their managers were.

Pay had a relatively small effect – and managers made a much larger impact.

“Conventional wisdom says you don’t leave your job – you leave your managers,” Staats says. “In this context, managers are a really significant driver.”

Supervisors have a strong impact on whether employees stay. Based on their data, if all employees were managed by the best supervisor, voluntary turnover would be reduced by more than 30 percent.

On the other hand, employees’ sensitivity to salary was low. Their model showed that a 30 percent increase in salary would decrease voluntary exits by just 2.5 percent.

“It’s easy to pull the salary lever,” Staats says. “We show the easy answer isn’t the right answer. Instead, company leaders should think about how to reinvest in your people.”

In addition, tenure changed workers’ behavior in important ways. Over time, their sensitivity to salary increased, but their willingness to stay for non-salary factors went down. And their long-term focus decreased even more.

This all has implications for how to structure interventions to reduce turnover, say Emadi and Staats.

Their data also suggests some factors that distinguish managers with the lowest voluntary attrition. They have, for example, higher rates of involuntary attrition by their workers — meaning they are more likely to terminate employment than average managers.

That’s not surprising, Staats says. It suggests those managers are attuned to making sure all of their employees are pulling their weight. If you’re doing a good job yourself, then not having to prop up underperforming co-workers might make your work environment more attractive.

But does any of this matter if you don’t operate a BPM company in India?

The answer is yes. Emadi’s and Staats’ model can be generalized to any workplace and they welcome the opportunity to run their model with data from more companies. Plug your company data into it and you should get a better understanding of what drives attrition for your employees.

“Part of our excitement about this project is that it creates a framework to take a comprehensive approach,” Staats says.

Employment at an Indian BPM isn’t the same as working at an investment bank or one of those West Coast tech firms known for their lavish perks, but Staats suspects the results for those or other firms would be similar.

“Anecdotally, there’s nothing I see here that I haven’t seen in companies that espouse how wonderful their working environments are,” he says.

Many people can earn a basic income regardless of where they work, he says, so other factors – such as interactions with a manager – become more important.

“Our work provides managers with a framework to develop a better understanding of their own attrition process, perform policy experiments – from pulling the salary lever to changing supervisors – and then make strategic decisions that could translate to profits or losses for the firm,” says Staats. “From an operational perspective, it moves us being concerned just about product and consumer operations to managing people as one of the most important resources we have.”