Military veteran learns to lead in the civilian world 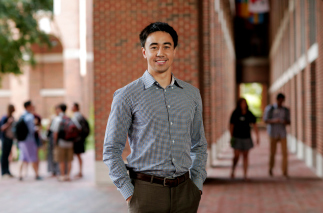 Jason Perocho (MBA ’15) has had to overcome more than his fair share of obstacles – from struggling to fit in as a minority in a small farming town, battling cancer as a young adult and working his way up in the Pentagon to transitioning from military officer to business school student.

“Change does not scare me. Nor do barriers,” he says. “I’ve had to overcome them my whole life. It’s what you learn to do.”

Perocho grew up in a small farming town in South Jersey. An aspiring naval aviator, he completed his undergraduate studies at the United States Naval Academy before heading to Pensacola, Fla. for Aviation Preflight Indoctrination. In between training, Perocho accepted a temporary assignment as a research assistant at the Pentagon. Shortly after arriving in D.C., his dreams were derailed.

Severe pains in his abdomen led to exploratory surgery for what doctors believed to be a hernia. Three weeks later, Perocho was diagnosed with epithelioid hemangioendothelioma – a very rare, malignant form of cancer.

“The diagnosis completely derailed my dream of becoming a pilot,” he says. “My focus shifted to surviving.” Though the diagnosis was difficult, he refused to let it stop him from living.

While undergoing treatment, Perocho dove headfirst into his work at the Pentagon. “I kept pushing and pushing,” he says. “I kept busy to distract myself from my illness and to leave behind something tangible in case it was my time.”

His work ethic caught the attention of the Assistant Secretary of the Navy, who soon appointed Perocho as his communications officer. And when former Secretary of Defense Robert Gates tasked his new boss with finding ways to cut $100B through the Better Buying Power initiative, Perocho voluntarily authored a white paper on his idea to digitize the Pentagon’s acquisition approval process. When the program was approved, he led its implementation efforts, facilitating the successful transition of more than 800 end users and saving 1000+ work hours and millions of taxpayer dollars annually.

Perocho was also nominated to be the Secretary of the Navy’s campaign manager for the annual Combined Federal Campaign, a fundraising initiative aimed at federal employees. His nomination was initially met with hesitation from higher-ups due to his age and rank, but it did not take long for Perocho to prove he was up to the challenge.

His hard work led to unprecedented success as he set an all-time record for the highest allotment total ever recorded by the Secretary of the Navy’s campaign manager.“It was a humbling experience,” he says of leading team members at the White House Military Office and the Naval Observatory, as well as 17 other offices scattered around the D.C. metro area.

Outside of work, Perocho searched for support groups to connect with other young professionals who were also battling cancer. When he couldn’t find one, he created his own.

Perocho’s foundation – dubbed “The 20% Foundation” – hosted support gatherings for young adults afflicted with cancer. The events were held in social settings like BBQs and bars to cultivate a natural setting for young adults to comfortably talk about their issues, with an anonymous psychologist always present to spark meaningful dialogue and guide those in need to the appropriate resources. To fund the foundation, Perocho ran a popular adult kickball franchise and threw special event fundraisers that raised over $10,000 a year for charity.

Perocho set a goal to stay in the Navy for five years – by any means necessary – in order to fulfill the full duration of his service commitment. His diagnosis should have led him to be medically discharged, but the Assistant Secretary of the Navy lobbied for his continuation on active duty at the Pentagon through the end of his service commitment.

As the end of the five years approached, Perocho began to prepare for the transition into the civilian world both personally and professionally. His then-roommate was considering applying to business school and suggested Perocho do the same. After leading major projects and initiatives, starting a foundation and running a franchise, the idea of business school made sense.

“I knew I needed business acumen,” Perocho says. “Through my experiences, I had a solid understanding on managing people. What I wanted to learn was how the business side actually worked.”

His boss, who had worked with UNC Kenan-Flagler’s Executive Development program on creating a course for the Department of the Navy, thought the School would be a good fit for Perocho.

As part of his search process, Perocho reached out to the veterans clubs at each school he was considering. He was impressed by how responsive and receptive the UNC Kenan-Flagler club was.

“The Veterans Club was a litmus test of the School’s culture for me,” he says. “We have certain needs and a background that not a lot of people understand. I wanted to be around a group that truly looked out for each other and find that cultural fit outside of the Navy. That is what I found at UNC Kenan-Flagler. This school mirrors the military community; you are around people that will always have your back.” 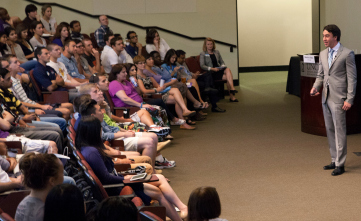 Perocho knew his biggest challenge in attending business school would be figuring out how to translate his leadership skills to the civilian world. “I wanted to figure that out in a safe environment, rather than in a business setting with a deal on the line,” he says. The emphasis on leadership and experiential opportunities offered by UNC Kenan-Flagler sealed his decision.

After arriving in Chapel Hill, he wasted no time getting involved at the School. Perocho – the current MBA Student Association (MBASA) President – is also a Dean’s Fellow, Marketing Fellow, Legacy Representative, involved in the Kenan Institute’s Concierge Service for Entrepreneurs and serves as an MBA Ambassador.

“I purposely sought out experiential opportunities where I would be able to lead people at school because I wanted to develop as a civilian leader,” he says. “In the civilian world, you can’t just give an order and expect people to do it. You don’t have the position of authority that you get with the rank on your collar in the military. In the civilian world, you have a title, but you still have to work to get buy-in. People are not going to blindly follow you.”

To help adapt his leadership skills and style, Perocho relies on the vast resources available through UNC Kenan-Flagler’s leadership initiative. “I’ve taken advantage of every simulation that we have,” he says. “I need to be put in those high pressure situations.”

And despite carrying a full course load each module and being involved in an extensive list of extra-curricular activities, Perocho makes it a priority to support causes important to his friends, classmates and executive team.

“Leadership boils down to managing people and accomplishing tasks,” he says. “The hardest part is managing people. It requires you to build those interpersonal relationships outside the confines of the 9-5 or 8-6.”

With future goals that include working for a tech company, launching a business and possibly venturing into politics, it’s clear that Perocho will use the leadership skills he developed in the Navy and at UNC Kenan-Flagler to make a lasting impact on the School and beyond.