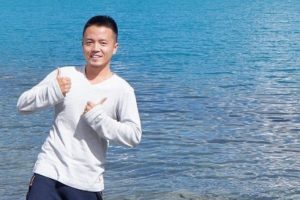 It all started at UNC Kenan-Flagler, where he entered and won the Carolina Challenge, a startup competition in which students, faculty, staff and alumni pitch their business ideas for a chance to win seed funding. Liu’s idea for mini-golf courses in China won the competition’s commercial business track.

And it was here that Liu says he first learned the term “social entrepreneurship” and had his eyes opened to the possibility of running a successful business that also gave back.

“In my heart, I always knew I wanted to do something that could impact people’s lives,” says Liu.

In 2013, after quitting his corporate job in Illinois and moving back to New York, he began working on 5ppl.com, a startup to help small business owners make direct connections with their customers. Business owners can post offers for unique experiences, such as a tasting event, restaurant tour or a cooking class with their restaurant’s chef. Up to five people can register for an offer – hence the company’s name – which takes place outside of peak business hours to allow for a more individualized experience and maximize downtimes for businesses.

Liu hopes 5ppl.com will encourage people to explore new local businesses and make new connections within their community. Posting an offer is free, and companies get added exposure when participants inevitably share their experiences on social media – making it a win-win for businesses.

While pitching his startup in New York, Liu was struck by how many interesting people he met – so he decided to launch another project on the side.

“I used to read inspirational quotes from millionaires like Donald Trump and Bill Gates when I was younger,” he says. “They always say things like ‘work hard and you will be successful’ – but there is so much more to it.”

To showcase the realities of the startup world, Liu launched Entrepreneurs of New York, an Instagram blog modeled after the popular Facebook blog “Humans of New York.” His blog features entrepreneurs of every kind – from the homeless to successful CEOs.

“All of these business owners have their own stories. I wanted to use real stories from average people to showcase the realities of entrepreneurship,” he says. “And if people like the stories, they can check out those businesses. I feel like I’m helping one business and one entrepreneur every day.”

Liu says his desire to help others stems from his experience in Chapel Hill. “Carolina teaches you how to be a good person and gives you the tools to be successful,” he says. “Those values go a long way.” And as a student worker in UNC Kenan-Flagler’s donor relations office, he saw this first-hand.

“I’ve seen the letters from donors – people who graduated 20 or 30 years ago – and their hearts are still at Carolina,” he says. “They want to help because they got this great education, and it helped them get to where they are.”

And there are many different ways to give back and make an impact, Liu adds. During his corporate career, he encouraged his bosses to hire UNC Kenan-Flagler grads. He makes it a priority to stay engaged with the alumni network and says he’s especially thankful for the friendships he made in school.

But most of all, Liu is grateful for the biggest lesson he learned in Chapel Hill. “Carolina reminded me there’s something bigger than yourself,” he says.