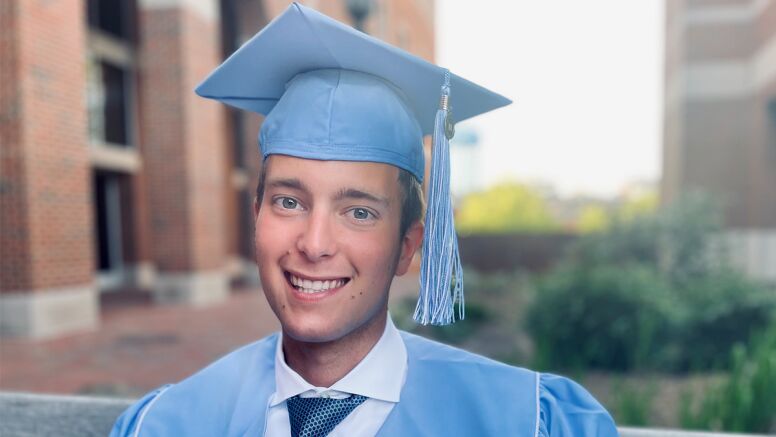 Beginning when he was 5 years old, Truman Mitchell would travel from his hometown of Toronto, Canada, to Chapel Hill a few times a year to watch basketball games with his father, who earned an MBA from UNC Kenan-Flagler Business School in 1985 and served on the school’s board of visitors.

So, when it came time to think about where to attend college, the decision was relatively simple.

“I grew up a huge fan of the culture and the spirit of the school. There was always a connection,” he said. “But I took a self-tour on campus and just walked through it when I was 17, and something just clicked. I just got a really good gut feeling.”

Carolina has become a second home for Mitchell as his college experience opened him up to new challenges that have prepared him for a career in wealth management and provided a blueprint for success.

During Commencement weekend, Mitchell said goodbye to Chapel Hill when he graduated from UNC Kenan-Flagler with a bachelor’s degree in business administration and started a new chapter at his new home in New York City.

It’s an opportunity that, in his first year at Carolina, seemed like a steep uphill climb.

At 18, Mitchell knew he wasn’t quite ready for college and he wanted a gap year to experience life outside of Toronto. He was accepted into AmeriCorps’ City Year program where he coached and tutored eighth-grade students at a Westside Chicago school with the goal of lowering its high dropout rate.

“I went to small private schools my entire life. My graduating class was 58 people,” he said. “Jumping into a big school with a level of maturity that would not have been conducive to the university lifestyle would have been disastrous. It was an important year for me to get work and cultural experiences outside of Toronto. It allowed me to grow up, and I needed it.”

After his gap year, Mitchell arrived in Chapel Hill with plans to attend UNC Kenan-Flagler, but the first year didn’t go smoothly. His grades in the prerequisite courses required for the business school initially missed the grade cut off, and it was suggested he might want to find a different major.

“That suggestion that maybe business school wasn’t for me was a pivotal moment, I took it a bit personally, and it stoked my determination. It was motivation,” he said. “I made it my goal. I had to retake two classes. I took them both in the same semester. I aced both classes that semester.”

He was accepted into the school the following year.

Accepting and tackling challenges wasn’t a new experience for Mitchell, however. He has been doing it for most of his life. When he was 5, he was diagnosed with Asperger’s Syndrome and a developmental coordination disorder.

“I struggled a lot early on in my life fitting in and living a normal life in many senses,” he said. “I always had to work hard, even in early, early life, on things like eye contact and focus. I had to struggle and scrap to get to where I am.”

Mitchell first opened up about his story during a business improv course. In an exercise that asked students to share a story that encapsulated them, he noticed how guarded his classmates were. Nobody was willing to be vulnerable, so he decided to tell his story — something he hadn’t really done publicly before.

His story ultimately opened up the rest of the class, he said, with more students having authentic conversations.

Mitchell continued to share his story this past semester as a speaker on a panel about neurodiversity in business, which he helped organize. The panel was his way to give back to the community that has given him so much.

“Where I was when I was a freshman to where I am now is night and day, and the business school has played a large part in that. The faculty members and everyone made me feel at home and gave me a community to be a part of where I could grow into myself,” he said. “I didn’t want to leave the school not giving back in some capacity.”

He wanted to show his classmates and future students that it is OK to be vulnerable and be themselves.

In New York, Mitchell will work at a wealth management firm. He credits a summer internship and the mentorship from faculty and classmates for setting him on that course.

“It was the faculty and the people in the Carolina community that truly made me grow into the community and enjoy it and appreciate it. I realize these are the people I want to be around throughout my life,” he said.

Mitchell’s father, Owen, who had taken him to all those Carolina basketball games as a child, passed away shortly before Mitchell arrived in Chapel Hill as a first-year student. Although walking the same hallways as his father did years before — learning in his shadow and footsteps — was difficult at times, having new shared experiences similar to what his father had, makes his achievement feel even more special.

“Chapel Hill will always be my second home. Kenan-Flagler and the school as a whole all played a huge part in that. I think that’s what my dad wanted for me, and I feel blessed to have had this experience.”