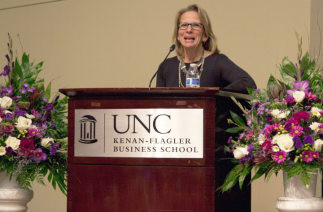 The key to success is making an impact.

That’s the lesson that Michele Buck (MBA ’87), president of The Hershey Company–North America, learned during a pivotal point in her career.

After earning her MBA from UNC Kenan-Flagler, Buck began her post-grad journey in the consumer packaged goods industry. She chose her jobs with the same care that she chose her schooling, placing an emphasis on finding companies that matched her values. Over the course of 27 years, Buck worked for some of the industry’s biggest players – Frito-Lay, Kraft Foods Group, Nabisco and now, The Hershey Company.

Early in her career, Buck was promoted to a general manager position with Nabisco. Unlike her previous experience, her new responsibilities included managing a variety of employees who reported to her and overseeing a plant.

The promotion was a significant turning point in her career. Stepping outside of her comfort zone was a daunting experience – but one she now considers key to her success.

Buck realized that she could approach her new role in one of two ways: Focus on what she already knew or figure out how to get the most out of the experience and build her skill set. She chose the latter.

“It was a big risk. It was a big stretch,” says Buck. “But assignments that stretch you and take you outside of your comfort zone are where you really learn a ton and really develop and grow.”

And those assignments that push and stretch you will pay off in the end, she says.

In that new position, Buck was responsible for a poorly performing plant that was facing the possibility of closing. Determined to turn things around, she committed to spending one week at the plant each month. She leveraged her strengths – mobilizing resources and connecting with people – and partnered with the plant manager, who brought an array of technical skills and knowledge that Buck did not have, to create positive change. She also asked plant employees for insights on what was and wasn’t working – and even worked the line alongside them to learn first-hand.

“If anybody knows how to turn the plant around, it’s the people on the line,” Buck says.

Her efforts changed the fate of the plant and its workers. Buck made major improvements, turning the poorly performing plant into one of Nabisco’s best, and achieved improvements on every metric, from quality to costs.

Clearly Buck was not the only one who benefitted from her hard work. The plant workers didn’t just keep their jobs – they thrived in them. At the end of her time with the plant, the workers presented Buck with a plaque to express their gratitude. It was then that she realized the greater impact of her actions – a lesson Buck has carried with her throughout her career.

“The most meaningful reward I have ever received in my entire career came from that plant. It was meaningful to me because of the result,” she said. “It was a chance to make an impact.”