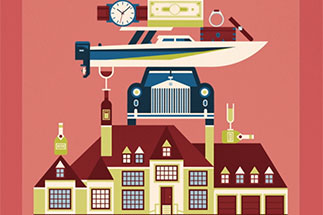 Deregulation has had a major influence on the characteristics and values of the chief executives who run America’s banks, according to research by Robert Bushman, the Forensic Accounting Distinguished Professor at UNC Kenan-Flagler, and his colleagues.

The researchers show that over that decade and in the years after, banks with more materialistic CEOS tended to:

“What we’re showing is that deregulation fundamentally alters the allocation of human capital in the economy,” says Bushman.

Branch banking was deregulated in 1994 by the Interstate Banking and Branching Efficiency Act. In 1999, the Gramm-Leach-Bliley Act allowed banks to compete more in insurance, securities sales and investment banking.

“It wasn’t just that deregulation caused banks to make different decisions,” Bushman says. “It was that it fundamentally altered the human capital that moved into the leadership positions.”

The study is important because it appears to be the first to link CEO materialism to specific corporate behaviors across an industry. It suggests that deregulation doesn’t just influence corporate strategy – but also the characteristics of corporate leaders. Those, in turn, influence company policy and culture.

Materialism, of course, is not a factor that’s measured, defined or listed in the SEC-required disclosures about top executives. To assess if bank CEOs are materialistic, Bushman and his colleagues got creative with their research.

They defined CEOs as “materialistic” based on their personal ownership of luxury goods – specifically if they owned at least one:

Data was obtained by licensed private investigators who conducted background checks on the hundreds of CEOs in the in the study. The researchers also checked local government property tax databases and other sources to confirm the values of assets such as real estate.

To double-check the robustness of the results, the team conducted a second analysis of the data where they defined a CEO as materialistic if the CEO owned a car with a purchase price greater than $110,000, a boat more than 40 feet long or homes worth five times the median home price in the firm’s corporate headquarters CBSA. Even with that higher bar, the study’s findings held up, Bushman says.

Though the study does not establish a causal connection between CEO materialism and the near-collapse of the financial industry in 2008, it does suggest the two are linked.

The researchers reviewed the connection between CEO materialism and two attributes that some researchers have said might have been factors in the financial crisis: Weakening of risk management functions at banks and a more materialistic corporate culture.

To measure the strength of a bank’s risk management, Bushman and his colleagues used a risk management index (RMI) constructed from a bank’s public financial reports. The RMI includes measures of the authority and importance of the bank’s chief risk officer, whether the board’s risk committee includes an independent director with banking or finance experience, and how often the risk committee met.

Observing company culture directly would be difficult, but Bushman and his colleagues measured whether culture changed by looking at insider trading by non-CEO executives. They looked at insider trading activity around opportunities related to government interventions during the financial crisis. Banks run by materialistic CEOs had executives who were more likely to take advantage of these opportunities, trading on insider knowledge before it became public.

The study has implications for policy makers and company boards. For regulators and legislators, it suggests they should consider how changes in industry regulation might change the character of executives who lead the companies. That, in turn, could lead to other changes in industry behavior.

Company boards also should consider the impact of hiring CEOs with different characteristics. However Bushman is not suggesting materialistic CEOs are “bad.” Rather, as with most decisions, there are trade-offs and boards need to consider their overarching goals and hire executives with the characteristics that help them achieve those goals.

“It’s a strategy choice,” Bushman says. “Do you want to just drive a completely homogenous industry where everyone has exactly the same background traits? Is that the way to build a vibrant, creative industry?”

A more materialistic CEO might be the right leader for a company and might deliver higher returns for investors, Bushman notes. But regulators and boards, who monitor and oversee those CEOs, should also keep an eye on changes to risk management practices and corporate governance.