Making the hop from consulting to entrepreneurship 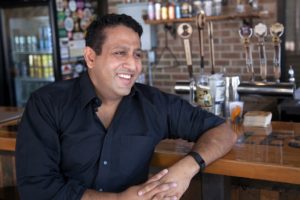 Vohra, whose background is in computer science, began his career at Cisco, where he held roles in tech and engineering. A few years later, he decided to change course and pursue consulting – but for that, he’d need a business background. After checking out Executive MBA programs at several top business schools, he chose to enroll at UNC Kenan-Flagler.

Around the same time, opportunity knocked. Vohra and his friends – who shared a passion for beer and home brewing – were presented with an opportunity to purchase a professional brewing equipment. They’d always kicked around the idea of opening a bar, and the opportunity was too good to pass up.

With a new business on the horizon, Vohra dove into entrepreneurship classes at UNC Kenan-Flagler, where wrote the business plan for Lonerider in Ted Zoller’s class. His MBA studies helped him land a role at Quintiles. For two years, he juggled working as a pharmaceutical consultant with launching and growing Lonerider before finally making the hop to full-time entrepreneur.

Read more about how Vohra is taking the craft beer industry by storm.