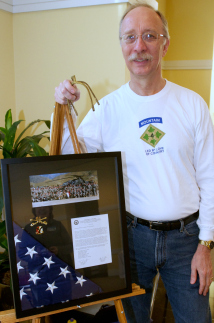 One flag is signed with notes of thanks from D Company of the 173rd Airborne. There is a plaque with the “colors” of the storied “Black Scarves” of the Army 2nd Infantry Regiment, of which Connolly is an honorary member. He also is an honorary member of the 28nd Infantry Regiment. And in 2016, he received the U.S. Navy Superior Public Service Award – the second highest award given to civilians.

These honors recognize Connolly’s dedication to serving those stationed in some of the world’s most dangerous places and symbolize the gratitude of the combat troops in Iraq and Afghanistan who received more than 14 tons of care packages sent by Connolly from 2005 to 2013.

“They are the evidence of what the packages meant to those guys, and that’s why they’re on the wall,” says Connolly. “It’s very gratifying work. It’s no less gratifying when you get a student who’s having a hard time understanding exactly how a train of thought works, to conquer some hard technique, to learn how to do some kind of analysis, but we don’t play for the same stakes. I figure every kid that gets looked after downrange is less likely to be a post-traumatic stress case on this end. So, if you get the chance to do it, you’ve got to run with it.”

The outreach started with an e-mail that Connolly sent to his listserv after his daughter told him about AnySoldier.com, which matches soldiers with people who want to send care packages. He asked neighbors if they would like to drop off used paperbacks and hotel-sized toiletries to send to troops. That message went viral, netting 1,500 pounds of supplies and dozens of cookies from a local baker.

“The truth is that this wouldn’t have happened without my wife Cindy’s active engagement and approval, and it became a family affair with our four daughters,” he says. “It dominated our kitchen table for eight years.”

Nick Black (MBA ’13) was one of those soldiers on the receiving end of a Connolly care package; another half dozen have joined the MBA program over the years. Black, who was deployed in Afghanistan, applied to UNC Kenan-Flagler with Connolly’s help and remains connected to the School through his work with Stop Soldier Suicide and Victory Social Capital. 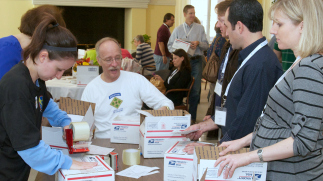 Connolly engaged the entire UNC Kenan-Flagler community in his efforts, but getting help was no problem. “I basically just asked,” he says.

His colleagues’ quick response speaks to the impact Connolly has made on the UNC Kenan-Flagler community throughout his 25 years at the School.

That impact was recognized by awarding him the Roy W. Holsten Exceptional Service Award from UNC Kenan-Flagler and the Chancellor’s Award from the University for his service and leadership.

Connolly took both of the accompanying cash awards to pay for shipping more packages to the troops.

“Bob’s work is a reminder to us that—in addition to being teachers and researchers— we are members of a community,” says Jennifer Conrad, senior associate dean for academic affairs and Dalton McMichael Distinguished Professor of Finance. “We’re proud of his commitment to our servicemen and women and happy to help. His effort also speaks to the School’s mission to be a ‘contributor to the welfare of North Carolina and the world beyond its borders.’”

Connolly teaches in most of the School’s programs and says each is a unique experience. “I have Undergraduate Business students for the first time in probably 10 years and they are absolutely, stunningly good. I typically teach the full-time MBA students their core economics class and a variety of electives. The Executive MBA students were always superb—they’re just kind of ‘let’s cut to the chase and get it done so we can all go home and get our jobs done.’” 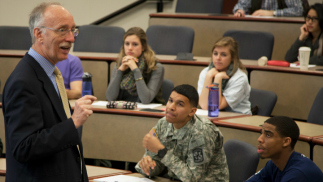 In addition to teaching a variety of students, Connolly has diverse research interests ranging from real estate to golf. A current project involves putting together complex databases to help understand market trading in claims on investment in commercial and industrial real estate.

He’s had long-standing interests in real estate markets, but took a while to identify a line of research that would make the impact he sought.

“In keeping with the idea that tenured faculty should take more risks, I decided to tackle a range of interesting questions in this arena that no one had studied in detail. That was the genesis of a now nearly two-year-old effort to build a comprehensive database of pricing, liquidity and market quality measures for securitized real estate assets – the REIT market,” he says. “Ultimately, our research will generate a clearer understanding of how these markets work and help unify research on equity market trading and microstructure with what happens in real estate markets.”

And even though he has no interest in playing golf, Connolly partnered with Professor Emeritus Dick Rendleman to research how golf tournaments can inform a better understanding the importance of luck in investing.

“I have not touched a golf club since 1974,”Connolly says. “What interests me is that golf is a really simple, straightforward place to think about tournament competition. The tournaments turn out to be, actually, very interesting and important devices in finance and economics for understanding incentives and investing behavior, competitive behavior and so forth.”

Their research shows that luck is a very important factor in tournament settings and that skill sometimes takes a very long time to rise to the top. Studying golf, where tournament play can be measured precisely and over long periods, has been a useful way to understand better what happens in asset management and other financial markets. 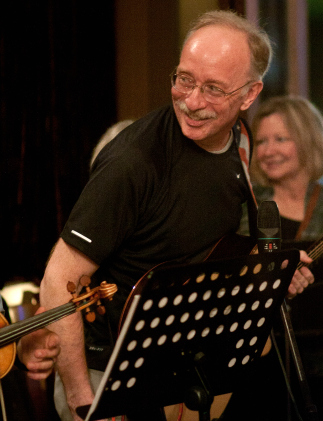 An extracurricular area where Connolly does participate is music. He began playing guitar in 1967 because “in 1967, that’s what 12-year-old boys did,” he said. “It’s just one of those things I’ve continued to work on, and here we are 47 years down the road and I’ve gotten reasonably decent at it.”

He now owns 13 guitars, including several archtops, a custom-built guitar made by the same craftsman who builds for Brad Paisley, and a Dobro. He has played every genre of music, with the exception of country and western – which he is working on now — and has performed at Business School events.

Improvisation in music is like business because you have to think creatively and take risks, Connolly says.

“When you are too conservative, when you play up short, that’s the spot when you aren’t really realizing potential,” he says. “There’s always a tradeoff between playing it safe and going for broke.”