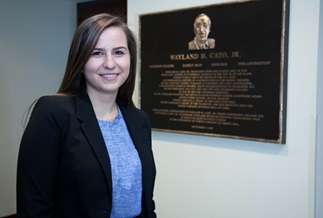 Terzic is a student in UNC Kenan-Flagler’s Assured Admission Program, through which the School – in partnership with UNC Undergraduate Admissions – selects an exemplary group of first-year students for assured admission to the Undergraduate Business Program.

The scholarship was established by Wayland H. Cato Jr. (BSCOM ’44), who graduated from UNC-Chapel Hill with a degree in commerce and ranked in the top 3 percent of his class. Cato served in the U.S. Navy as commanding officer of a minesweeper in the Pacific Theater during World War II. Along with his father, he founded the Cato Corporation – a multi-state women’s apparel chain headquartered in Charlotte – in 1946. He was president of the company from 1960-93, CEO from 1968-99 and chairman from 1970-2003. In 2004 he became chairman emeritus and was inducted into the North Carolina Business Hall of Fame. Among his other honors, Cato received the UNC Kenan-Flagler Leadership Award in 2007.

“Being named a Cato Scholar has made all the difference in the world to me,” says Terzic. “Rather than worrying about paying for school, I can focus solely on my education and other academic pursuits. I have the added benefit of knowing that someone believed in me enough to support my education, which propels me to do the best that I can.”

Terzic serves as counsel for the UNC Honor System, representing her classmates in both investigative and defensive capacities. She also plays a key role in attracting sponsors and recruiters to UNC Kenan-Flagler’s annual Undergraduate Business Symposium, the largest recruiting event on campus. Ultimately, she wants to pursue a career in corporate law.

“Being a Cato Scholar has changed my life, and I feel incredibly blessed to have the opportunity to be a part of the Assured Admission Program. I hope to one day be able to give back to the Cato Foundation and Carolina in as many ways as I possibly can.”

The scholarship is awarded to undergraduate students based upon academic merit and promise and was created for in-state first-years and sophomores who have been admitted into the Assured Admission Program and intend to enroll at UNC Kenan-Flagler. It also can be awarded to juniors and/or seniors currently enrolled in the Business School.

The scholarship covers the cost of tuition, fees, room and board, books and course-related supplies, and academic enrichment activities.

“At UNC Kenan-Flagler, we are committed to helping high-quality students excel,” says Doug Shackelford, dean and Meade H. Willis Distinguished Professor of Taxation. “Mr. Cato’s endowment continues to serve as a vital source of support as we work to achieve this important goal.”