Learning about executing strategy from the military 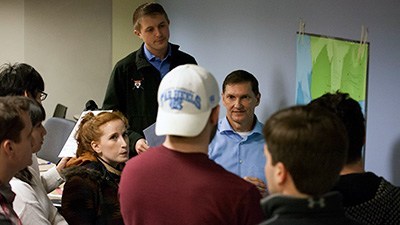 Leading a military operation and creating a business strategy have more in common than you might think.

After working for more than 24 years in pharmaceuticals and telecommunications, Smith could see business as a type of warfare.

Take Amazon and Wal-Mart – two of America’s largest companies – for example. The retailers are in the business of outselling each other and increasing market share. In many ways, business is simply a battle of outmaneuvering, agility and decoding the competitive environment.

Smith wanted a way to apply business strategy with the military’s execution strategy. “There had to be a way that we can go to from strategy to execution in a more strategic way,” he says.

Smith soon realized that the military already had a phrase for that: operational art.

Operational art uses military forces to achieve strategic goals through design, organization, integration and conducting strategies, campaigns, major operations, and battles. It helps commanders use resources efficiently and effectively to achieve strategic objectives – and could be applied by business leaders.

To bring military strategy to the civilian world, Smith guides professionals through their own military mission to test their operational art.  In “Operation Osprey” teams plan a military attack to save a hostage.

No matter the outcome of the mission, professionals return to the civilian world they know best, but they don’t leave without debriefing and reflecting on their strategy and lessons learned. After each mission, military teams take the time to debrief and analyze the actions that went wrong and right.

While the military debriefs after every mission, most businesses don’t take the time to take this very easy action. Debriefing is what helps leaders grow in their executional strategy, says Smith.

“Don’t be afraid to peel off the name tag and be brutally honest about what went wrong,” he says. “Debriefing ensures your team’s learnings don’t go out the window.”